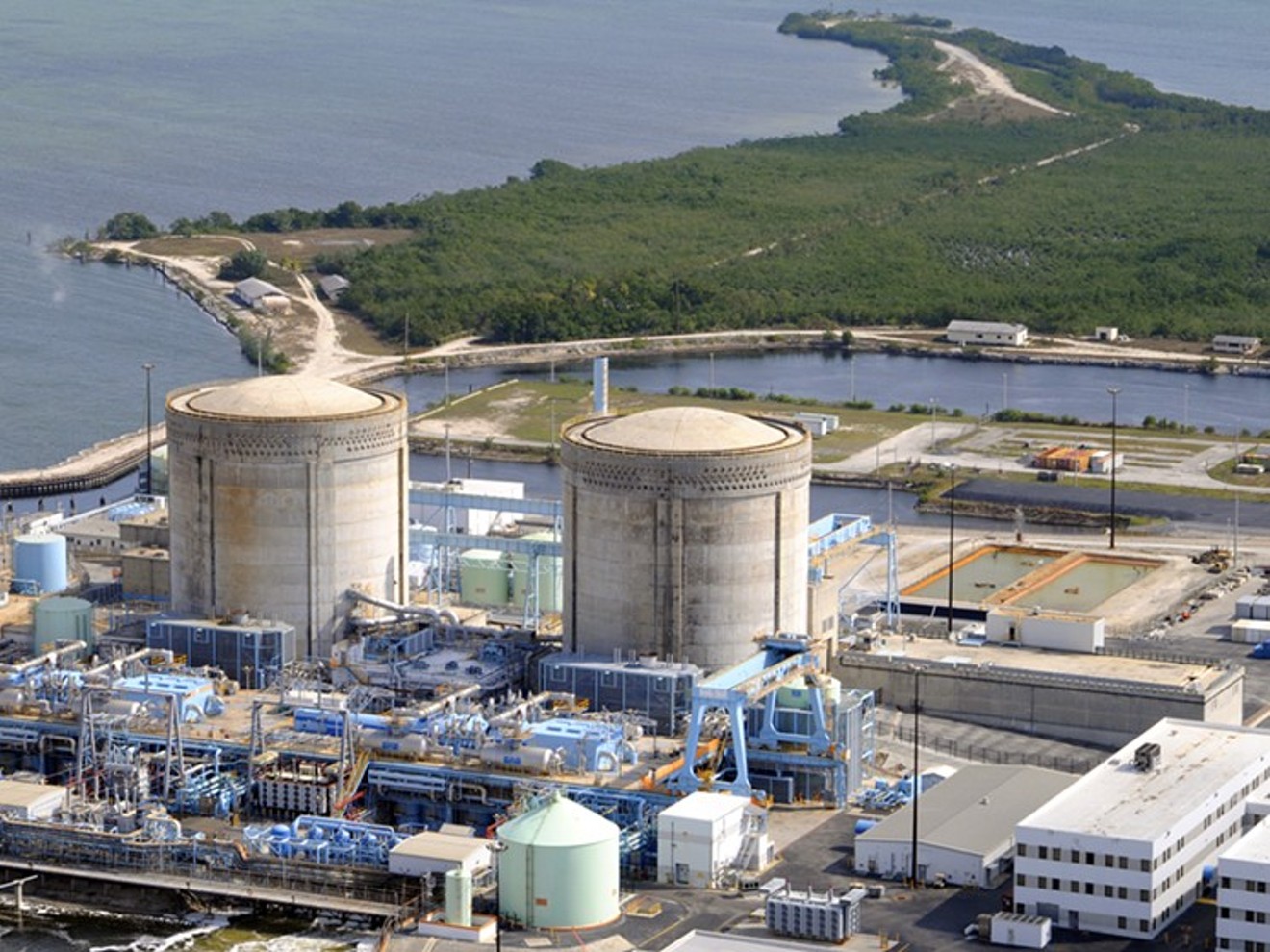 Courtesy of FPL
For the past seven years, Florida Power & Light has battled environmentalists over its plans to build two new reactors and inject their radioactive waste 3,000 feet underground, just below the aquifers where South Florida gets its drinking water. Environmentalists have vigorously argued that science shows the dangerous waste could leech upward into Miami's drinking water. And yesterday, those green activists finally earned a hearing before the federal Nuclear Regulatory Commission (NRC).

But it turns out the two environmental groups leading the fight aren't the only ones opposed to the plan: Lawyers for the City of Miami and the nearby Village of Pinecrest both slammed FPL's plan and urged the NRC to reconsider the electric monopoly's proposal. Miami Assistant City Attorney Xavier Albán called FPL's final "environmental impact statement" for the new reactors at the Turkey Point Nuclear Generating Station "deficient" and begged the NRC to force FPL to come up with a waste-storage plan that would not affect Miami's drinking water.

"FPL has failed to adequately demonstrate that the direct effect, indirect effects, and cumulative impact to the natural physical environment are 'small,'" Albán said. "The environmental impacts will not be 'small.'"

The risk of possible carcinogens leaking into the city's source of drinking water "can never be small," he added.

FPL also spoke in front of the NRC yesterday and argued that the environmentalists and city officials were wrong. Its science was just fine, the company claimed.

"The NRC is not required to look at every potential environmental impact and does not have to consider worst-case scenarios," an FPL representative said before the NRC board.

In Miami and Pinecrest, FPL has found its two largest opponents to date. The official challenge to the company's plans was brought by two groups: the Southern Alliance for Clean Energy (SACE) and National Parks Conservation Association (NPCA). The power company had dismissed groups such as SACE as "anti-nuclear" extremist using the wastewater-storage plan as a cover to try to tank a Turkey Point expansion.

But FPL will have a difficult time painting the City of Miami — hardly the greenest organization on Earth — with a similar brush.

"The City of Miami has serious concerns with respect to FPL's application for a combined operating license for Turkey Point proposed units six and seven," Albán said. "With respect to the contention before you, this matter specifically relates to the sanctity and protection of a designated source of drinking water, the Upper Floridan Aquifer."

Turkey Point has been the bane of Florida environmentalists since it was built in the 1970s. The plant sits near multiple protected wetland areas, nature preserves, and conservation sites and uses a unique method — a cooling canal system — to treat its wastewater. But those canals are already leaking into Biscayne Bay, and cities across South Florida have urged FPL to stop using the canals.

Since 1973, it's also been proven that nuclear power is neither "clean" nor "carbon neutral": In addition to nuclear-waste concerns, the methods required to dig up and enrich uranium leak carbon dioxide into the air, thus contributing to climate change. (Nuclear plants have also become more expensive to build over the past few years, while costs for renewable energy such as solar and wind have fallen.)

Despite those concerns, FPL in 2009 applied to build two new reactors at Turkey Point. The next year, SACE filed a petition to stop the plan, on the grounds that FPL's wastewater-storage plan is potentially dangerous to humans and the environment. FPL wants to inject radioactive waste into the so-called Boulder Zone of the Floridan Aquifer, a rocky area full of extremely salty water about 3,000 feet below ground. Miami-Dade County has used the area for decades to store raw sewage.

But new government studies, including one comprehensive 2015 study from the United States Geological Survey (USGS), warn that fluid injected into the Boulder Zone could leak into the Biscayne Aquifer and other federally protected drinking-water sources.

To move forward, the NRC must approve FPL's "Environmental Impact Statement." The NRC issued an initial approval in October. But SACE's legal petition still lingered, and after years of fighting, the NRC finally granted SACE an "evidentiary hearing" to raise concerns about FPL's waste-storage plan yesterday. (SACE previously told New Times that since its initial complaint was filed in 2010, it did not deal specifically with FPL's radioactive-waste plan; rather, SACE contends that other carcinogens, including ethylbenzene, could also leech into the Biscayne Aquifer.)

After SACE spoke against the plan yesterday, both the City of Miami's Albán and an attorney for the Village of Pinecrest laid into the science that FPL used to argue for its new reactors. According to the City of Miami, the "low-level" concentrations of waste that FPL claims it will inject into the ground aren't scientifically accurate. Albán said that FPL plans to use as many as 13 wells to inject waste into the Boulder Zone — and that the combined waste from those wells isn't factored into the last Turkey Point impact statement.

"The concentrations of chemicals, some of which are potentially carcinogenic, are not accurate," Albán said.

With those 13 injection-wells operating, the city also said, the wastewater has the potential to drift much farther westward than FPL projects. Albán also mentioned the 2015 USGS study, which warned that fault lines and conical "Karst collapse" holes in the confining rock layer could lead to drinking-water contamination.

These issues are "gravely concerning to the residents of the Village of Pinecrest," that city's representative also said from the podium.

In response, the power company's representatives instead argued that FPL and the NRC had done enough under federal law to let the electricity monopoly continue building.

"Obviously, the applicant has more than satisfied its obligations under NEPA [National Environmental Policy Act]," FPL's representative said. The company cited multiple licensed geologists and at least one Florida State University toxicologist, who all worked on the proposal. FPL claimed the radioactive waste's injection 3,000 feet below ground, under roughly 500 yards of "confining rock," is enough of a barrier to protect the public from any adverse effects. FPL also dismissed the concerns of SACE, the National Parks Conservation Association, the Village of Pinecrest, and the City of Miami as "not science" but "pure speculation."

"From their perspective, there is simply no scientific basis for concluding that the environmental impacts are greater than small or that further study is necessary," FPL's representative said.

The NRC will likely take weeks, or perhaps months, to issue a ruling.