According to CNN, which is the home of his show Parts Unknown, Bourdain was filming an episode in France. His close friend, master chef Eric Ripert, found the writer unresponsive in his hotel room Friday morning. His death is being called a suicide. CNN, which reported he hanged himself, issued the following statement:

It is with extraordinary sadness we can confirm the death of our friend and colleague, Anthony Bourdain. His love of great adventure, new friends, fine food and drink and the remarkable stories of the world made him a unique storyteller. His talents never ceased to amaze us and we will miss him very much. Our thoughts and prayers are with his daughter and family at this incredibly difficult time.


Though Bourdain's home base was New York City and the world was his playground, he had a strong, magnetic attraction to Miami.

The chef was a frequent face at the South Beach Wine & Food Festival. A Bourdain appearance at an event often meant an instant sellout, with fans clamoring to experience his rapier wit and antics. One such example was when Bourdain took the stage at the 2011 festival's Grand Tasting Village with a giant, doctored carnival wheel. PBR in hand, he invited audience members to spin the wheel and ask a question related to the topic on which they landed ("dick/poop jokes," "politics and religion," and "Top Chef" being some of the choices).

In 2017, Bourdain MC'ed the festival's tribute dinner honoring José Andrés. It became a memorable evening when Andrés tore off his white chef’s coat onstage to reveal a black T-shirt reading, “I am an immigrant.”

Festival founder Lee Schrager has a long history with Bourdain. He recalls first meeting the chef at the Culinary Institute of America. "He was a class and a half ahead of me. I graduated in 1979," Schrager says. Their paths would cross again and again, including the time Bourdain wrote the introduction to Schrager's first cookbook.

According to Schrager, Bourdain in his bad-boy persona. "I remember hearing him up onstage talking shit about Food Network. I was like, Oh my God, this is our title sponsor. But that was Anthony. The audience loved him."

Schrager says he was working on getting Bourdain and his girlfriend, Asia Argento, to attend a special #MeToo event at the upcoming New York City Wine & Food Festival. "That was the last communication I had with him."

The festival founder says that, ultimately, Bourdain will be remembered for his ability to share his vision our global love affair with the dinner table. "Anthony was a gifted storyteller. I think his book Kitchen Confidential changed the culinary world. Through his writing and his television shows, he took us on a journey of eating that most people would never get a chance to experience." 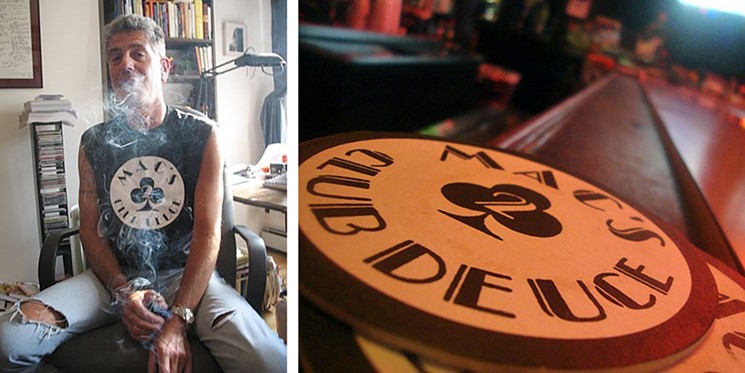 Courtesy photo
Bourdain began with A Cook's Tour on Food Network, moved on to Anthony Bourdain: No Reservations and The Layover on the Travel Channel, and finally did his CNN work. The chef-turned-TV-host filmed several episodes of his shows in Miami. He would always ask local chefs and celebrities to act as tour guides and ambassadors. The list of Miamians tasked with showing him around included Kris Wessel, Michelle Bernstein, Michael Schwartz, and Richard Hales.

When it came time for Bourdain to swing back down to the Magic City for Parts Unknown in 2015, he called documentary filmmakers Billy Corben and Alfred Spellman. It turns out the chef was a fan of the pair's infamous film, Cocaine Cowboys. “Part of what helps you keep going and pushes you to grow is that you have cool fans boosting you,” a distraught Corben told New Times this morning. “That was fucking incredible, to get that endorsement from him.”

For the Parts Unknown shoot, Bourdain took Corben and Spellman out to Captain Jim’s Seafood Market & Restaurant in North Miami, where the trio bonded over a shared interest in stone crabs and drug crime. As the two filmmakers held court with Bourdain and shared stories of Miami’s cocaine-running glory days, Corben sipped a beer — something he almost never does. Typically, he’s a whiskey man.

“You better believe that when Anthony Bourdain invites you out for a beer, you drink a beer,” Corben says today.

It turns out, Corben says, Bourdain’s fandom was real: After their hourlong interview ended, the three continued to crack stone-crab shells and “shoot the shit” for another hour after the cameras quit rolling. Bourdain never forgot them either: Corben and Spellman attended the New York City premiere of Bourdain’s 2017 documentary on food waste, Wasted!, and stopped by to say hello to the TV host.

“He was just a fan!” Corben says. “I remember we were some of the first people to tell him about Waffle ” Corben says that at the premiere, he remembers watching Bourdain let off a now-infamous rant criticizing accused rapist Harvey Weinstein. (Until his death, Bourdain was dating actress Asia Argento, who says Weinstein abused her.)

“You could see, obviously, Anthony was a guy pretty candid about his demons,” Corben says. “Apparently, there was more going on there than people must have known.”

Corben tweeted a tribute this morning:


I don’t drink beer, but @Bourdain once invited @AlfredSpellman and I out for a beer. I drank beer that day. #RIP https://t.co/NqmAkXwehx pic.twitter.com/cjHnTbqIE9

Bourdain also loved Miami Beach's gritty haunts. While in town, he would get tattooed at Love Hate before stopping for a beer or two at Mac's Club Deuce. Bourdain included the bar in a 2006 episode of No Reservations, in which he called the dive one of his "favorite places on Earth." Bourdain seemed to find a kindred spirit in the then-100-year-old Mac, who shared the chef's passion for oral history, working-class people, and cheap beer.

RIP Mac . #ClubDeuce A Drinking Class Hero till the end at 101 . Let flags fly at half mast in Miami .


Even New Times has a history with Bourdain. In April 2012, he tweeted, "Congratulations Miami New Times for most offensively insipid review of an episode of No Reservations to date! Africaissuchadowner [sic]!"

That tweet, in response to a review of the Mozambique episode of No Reservations, sparked a direct conversation between Bourdain and New Times, in which we talked about various topics, including him being a celebrity engulfed in a 24-hour news cycle. Bourdain's response:

Hey. You play, you pay. I can't complain. Believe it or not, I'm not sitting around trying to think of ways to stay in the public eye. If I blab out loud on twitter when something outrages me, it's a barely under control instinct—not a calculated thing. It's frankly, a sign of weakness in my view. Mom always told me to be polite, never be a show off, think before you speak. Not the only way in which I disappointed, I'd venture. Just can't help it. Twitter is fun. I forget sometimes how many eyes are following. Or don't care until it's too late.

Bourdain's shows have won numerous awards, including several Emmys and a 2013 Peabody. His books were New York Times . From his culinary background to his work as a world traveler, Anthony Bourdain changed the way we see food — and made us remember that you can't talk about your meals without understanding the real, hardworking people who create them.

Mac's Club Deuce will hold an Anthony Bourdain tribute night starting at 11 p.m. tonight. If the afterlife indeed exists, Bourdain should be sitting down for a beer with Mac up there at just about the same time.

If you or a loved one are feeling suicidal thoughts, call the National Suicide Prevention Lifeline at 800-273-8255.
KEEP MIAMI NEW TIMES FREE... Since we started Miami New Times, it has been defined as the free, independent voice of Miami, and we'd like to keep it that way. With local media under siege, it's more important than ever for us to rally support behind funding our local journalism. You can help by participating in our "I Support" program, allowing us to keep offering readers access to our incisive coverage of local news, food and culture with no paywalls.
Make a one-time donation today for as little as $1.