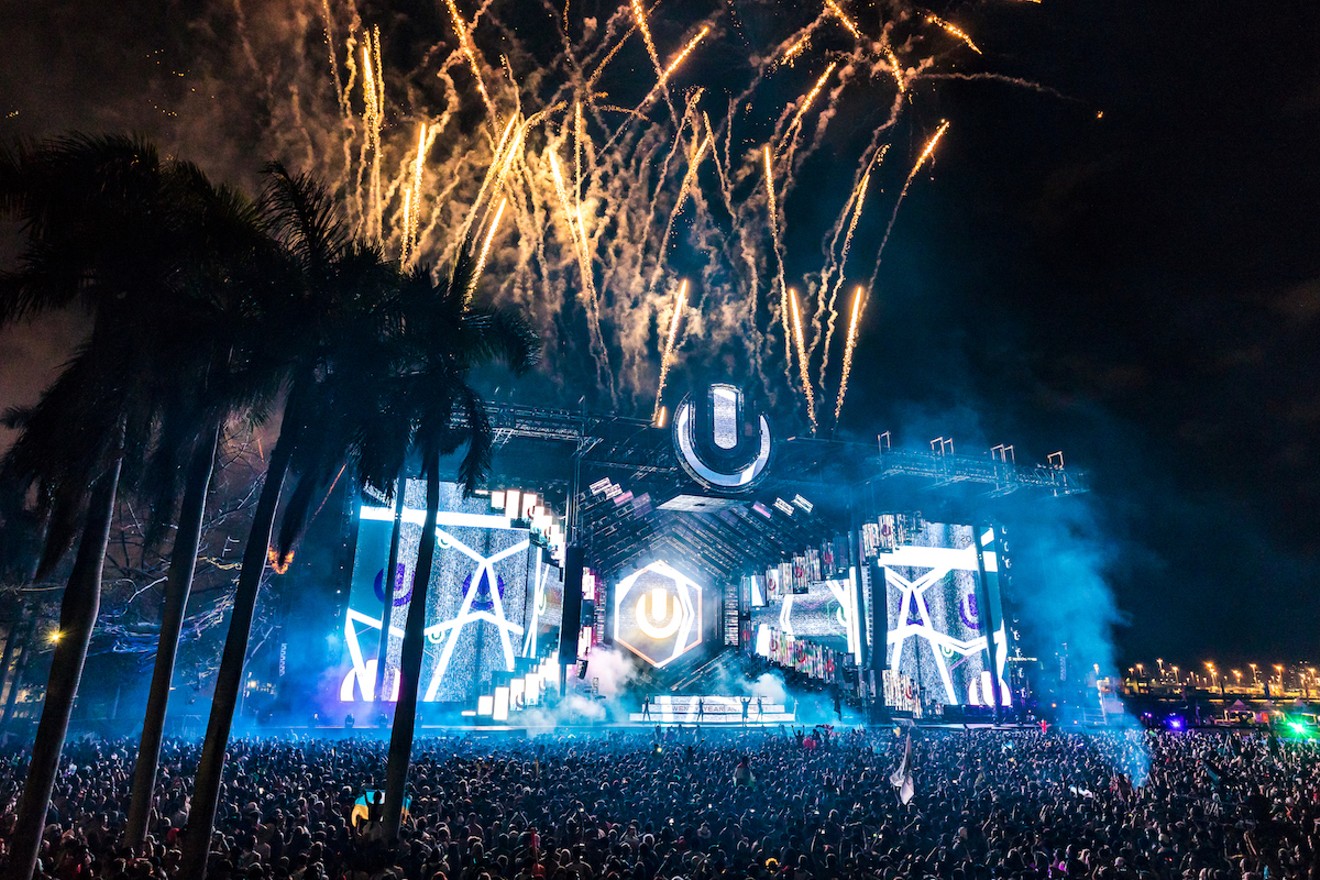 Ultra 2020 might not happen. Photo by Alive Coverage
The Miami Herald reports that this year's edition of Ultra Music Festival, scheduled for March 20 through 22, has been “suspended” after a meeting earlier today between festival organizers and Miami city officials.

Joe Carollo, District 3 city commissioner, addressed the media today after a meeting with Ultra organizers. He was very careful with his words.

“We're not saying 'canceling,'” Carollo says in a video posted on the Herald's website. “We're saying, 'Suspending to a later date when we have a better idea where we're heading with the coronavirus.'”

In the video, Miami Mayor Francis Suarez says the city is monitoring all statements from the medical examiner, the Florida Department of Health, and the U.S. Centers for Disease Control and Prevention as the situation develops.

Reached by New Times, a spokesperson for Ultra declined to comment.

The reported cancellation raises questions about whether other major events scheduled for this month — including the Calle Ocho festival in Little Havana and the Miami Open tennis tournament at Hard Rock Stadium — might also be scrapped.

“Our top priority is the health and safety of our fans, players and staff," the statement reads. "We are proceeding with our preparations for the 2020 Miami Open while monitoring the situation closely in partnership with local, state and federal health officials, as well as the ATP and WTA tours. We are also working with our partner Baptist Health and following CDC guidelines closely to ensure a safe environment for everyone involved in the tournament.”

This development might also affect this year's Winter Music Conference, the long-running annual electronic music convention that's set to hold its 35th edition this year. (WMC has officially partnered with Ultra since 2018.) Ultra's reported postponement may also cause fallout for the dozens of satellite events that have been planned to take place during Miami Music Week. (Some event organizers are already responding to today's news with assurances they intend to proceed as planned.)

And then there are the economic consequences for Miami businesses. Hotel occupancy during Miami Music Week and Ultra typically hovers around 90 percent, making it one of the busiest weeks for tourism during the calendar year. Additionally, many nightclubs rely on Miami Music Week to top off their coffers before the summer slowdown. According to a report several years ago from the Washington Economics Group, Ultra alone generates $79 million in annual revenue in Miami-Dade County.

Rumors of a possible Ultra postponement swirled this week as public requests for reconsideration began to circulate. This past Tuesday, Miami-Dade County Mayor Carlos Gimenez sought to quell rumors that Ultra would be canceled. A day earlier, Florida Gov. Ron DeSantis declared a state of emergency after two coronavirus cases were confirmed in the state. (That number still stands at two, according to the Florida Department of Health.)

A sister event, Ultra Abu Dhabi, was canceled earlier this week over concerns about the virus. That festival had been slated to begin March 5.

Ultra Miami is an international event in the dance music world and annually draws attendees to Miami from more than a hundred countries. This year's edition had already proven controversial: In January, a small group of downtown residents who disagreed with the city's decision to allow the event to proceed in Bayfront Park filed suit against the city.

The 21-year-old festival almost always has been held in an open-air venue downtown. It was forced to move to Virginia Key in 2019 after the city failed to renew Ultra's license. The move, announced four months before the event, led to hasty logistical planning and a subsequent outcry over numerous transportation blunders.

This story is developing.
KEEP MIAMI NEW TIMES FREE... Since we started Miami New Times, it has been defined as the free, independent voice of Miami, and we'd like to keep it that way. With local media under siege, it's more important than ever for us to rally support behind funding our local journalism. You can help by participating in our "I Support" program, allowing us to keep offering readers access to our incisive coverage of local news, food and culture with no paywalls.
Make a one-time donation today for as little as $1.