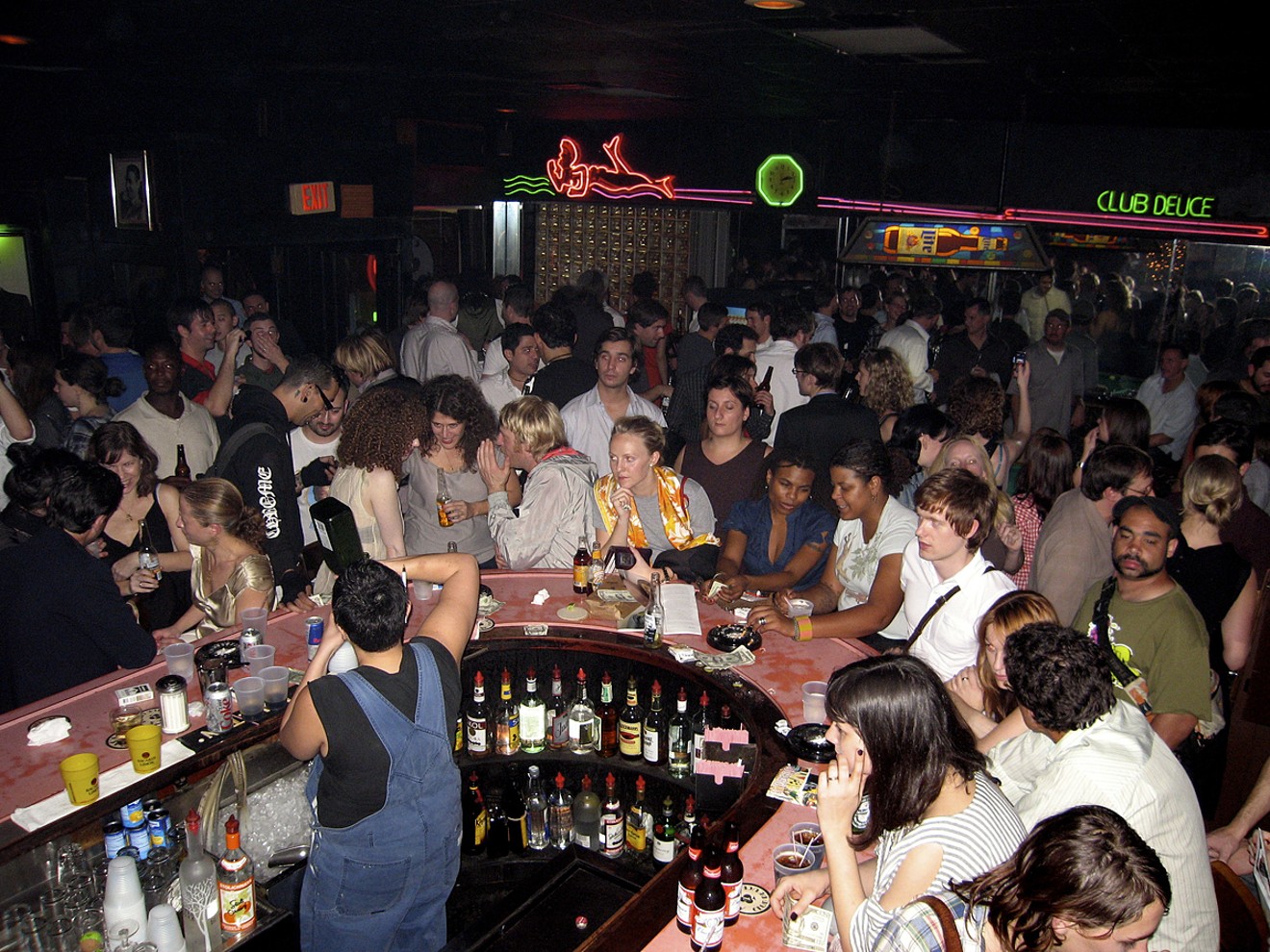 Churchill's Pub
Photo by Monica McGivern
Miami is changing fast. The arts and entertainment boom can make it pretty difficult to keep up with the goings-on around the city; that's why New Times takes a moment every month to recap the closing of the city's most frequented establishments and opening of future favorites.

Though there's much to love in the way of pristine, fashionable Wynwood bars with fancy specialty cocktails, sometimes the heart calls for a no-frills place where the walls are wooden and the carpet is drenched in stale beer.

We often toast to the bars that breathe new life into Miami's nightlife, but it's also important to take the time to salute the ones where everybody knows your name — the ones that have stuck it out for decades and made Miami a lovable mess. As Drake once said, "No new friends," so go check out some old ones.

Here are the ten best dive bars in Miami:

1. Grove Bay Grill. 3381 Pan American Dr., Coconut Grove; 305-285-1366; grovebaygroup.com.
The impending closing of Scotty's Landing struck fear in the beer bellies of Coconut Grove denizens in 2015, but when the bar/restaurant reopened as Grove Bay Grill, the place was pretty much the same. Sure, the menu has been spruced up a bit, but the bar still feels like a pirate's hideaway. Garden lights glow at night over the seating area, and the place plays dress-up as a fancy seaside restaurant. But the rugged bar and the drunk cover-band sing-alongs give Grove Bay away. This is the same bar Miami has known and loved for decades. 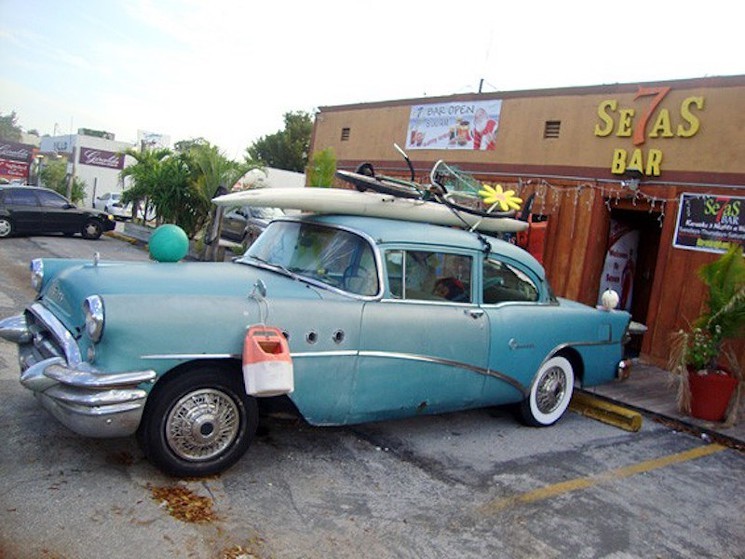 Courtesy of Seven Seas
2. Seven Seas. 2200 SW 57th Ave., Miami; 305-266-6071. facebook.com/sevenseasbar.
Seven Seas has never concerned itself with staying current. Its relaxed, antique beach-town decor says "we don't judge here." This begins when you enter through the driftwood-like doors beneath the bar's iconic lucky number "7" sign. This is the ideal spot to try karaoke, and Seven Seas offers plenty of opportunities; it hosts karaoke Tuesday, Thursday, and even Saturday nights. So whether you're jonesin' for a beer on a weeknight and don't want to head east to Wynwood, or making a spontaneous layover on your Uber ride back west, there are plenty of chances to rock the mike. Bernie Ravelo of Karaoke With Bernie has hosted for more than a decade, so he's seen it all: Miami squads taking on the Spice Girls, tired "Single Ladies" choreography, and more 2 a.m. renditions of "Don't Stop Believing" than any human should ever have to bear. If karaoke isn't your thing, fear not — there's still room at the bar for you. Seven Seas also hosts trivia games Monday nights for nerdy cheap-beer aficionados with stage fright. 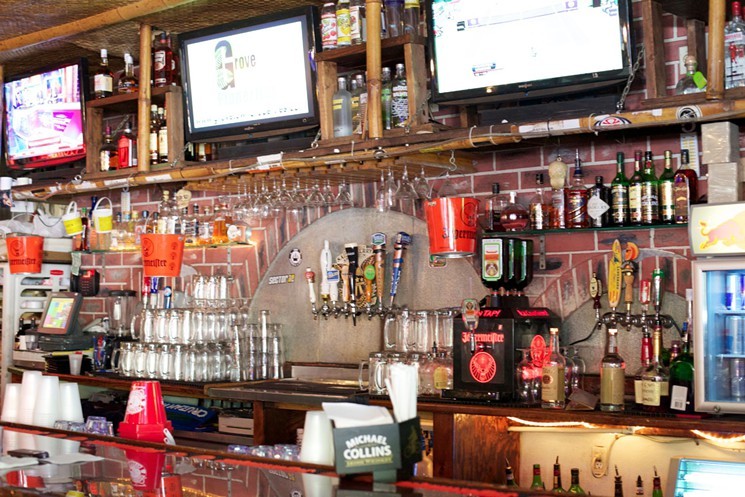 Sandbar Grill
Courtesy of Sandbar
3. Sandbar Sports Grill. 3064 Grand Ave., Coconut Grove; 305-444-5270; sandbargrove.com.
With TV sets and giant projector screens, endless pints of beer, and enough room to bring the whole crew, Sandbar is the place to be on game day. The inside area offers plenty of seating room at long tables made for large groups, and the porch is fit for short smoke breaks or extended people-watching in Miami's original hippie-wacko neighborhood. Leather pants, stiletto boots, and crazy traffic belong in Wynwood, but everyone belongs at Sandbar — whether it's young and old Grove locals or college kids wrapping up their night with an ill-advised late-night bucket of wings.

Irish Times
Photo by George Martinez
4. Irish Times. 5850 Sunset Dr., South Miami; 305-667-4114; irishtimesmia.com.
It would be hard to imagine a bar that made patrons feel more at home than Irish Times. The South Miami mainstay is a cornerstone of its rapidly changing, boutique-driven neighborhood. A jukebox, pool table, and remarkably friendly staff make this hideout customizable to everyone's needs. The bar nachos are a constant temptation, and stopping in at lunchtime is often rewarded with extra treats such as fries made fresh from the kitchen. The bar bursts at the seams with crowds until late into the night on weekends, but on weekdays, Irish Times is just another hole in the wall from a bygone Miami era. 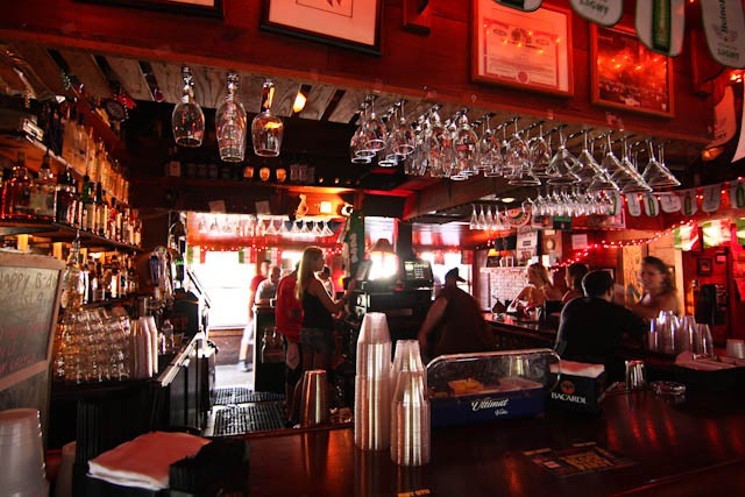 5. Bougainvillea's Old Florida Tavern. 7221 SW 58th Ave., South Miami; 305-669-8577; facebook.com/bougiesbar.
Bougie's is the perfect place to blow off steam after a hectic day of work and traffic. Rock bands continued to get booked here after guitars were passed over for laptops and drum machines at most other Saturday-night Miami shows. There's a bar with cheap drinks and wells inside for those who aren't afraid of large speakers with loud rock blasting at close range, but there's also a refuge from the noise at the outside bar, as well as cozy garden seating out front.