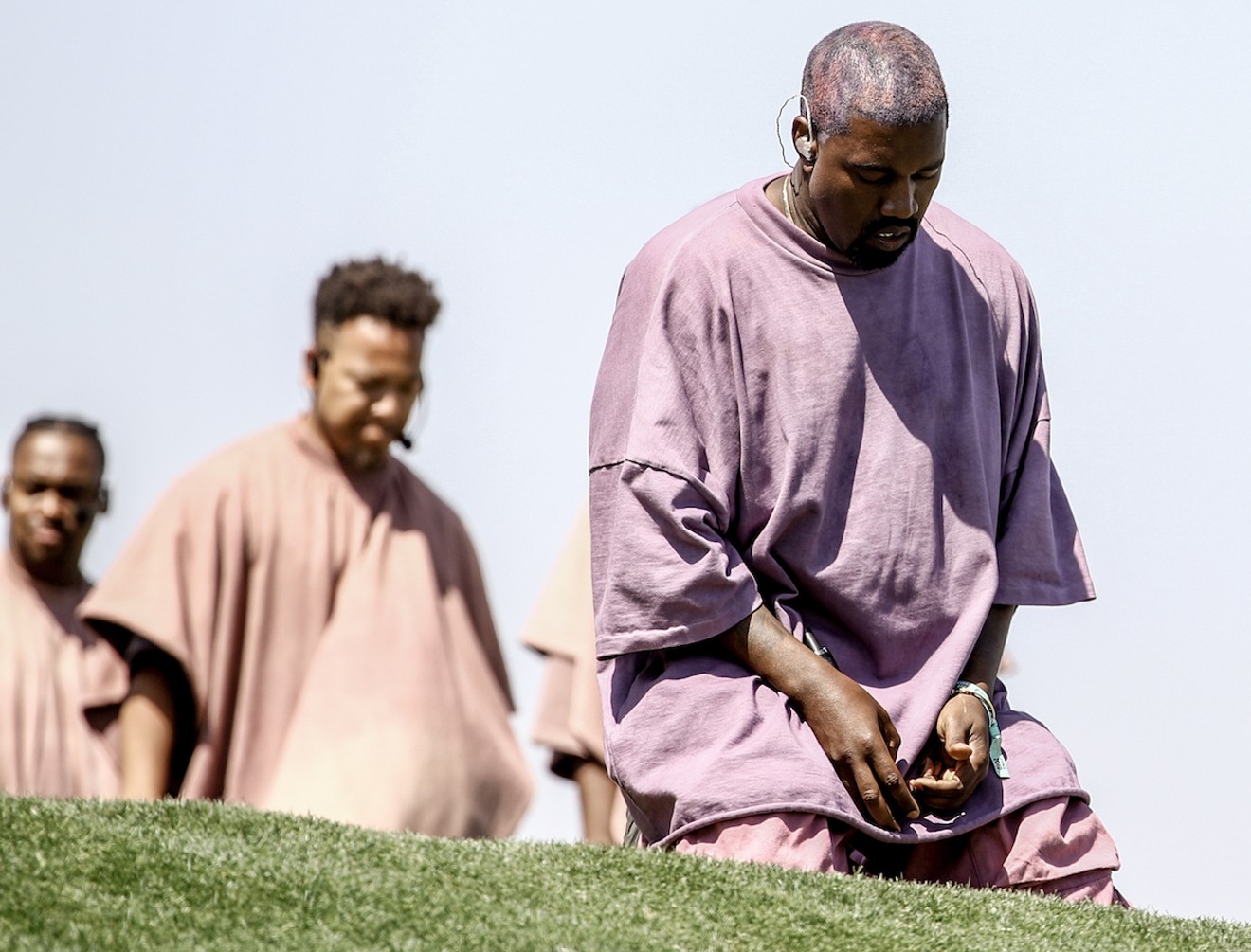 Kanye West's Sunday Service performance at Coachella 2019. Photo by Rich Fury/Getty Images
Nowadays, Kanye West seems less like an iconic musician and more like a stylish itinerant preacher with an overgrown flock. Despite the hostile reviews that greeted his last album — the gospel record Jesus Is King — Yeezy is still hell-bent (or heaven-bent?) on doing the whole Christian thing. Since last year, he's been touring his church-inspired Sunday Service concerts across the nation, and now, after presenting his opera Mary in Miami during Art Basel, he's staging his return to the Magic City. On Sunday, February 2 — you know, Super Bowl Sunday — West will bring his Sunday Service show to the FPL Solar Amphitheater, the venue formerly known as Bayfront Park Amphitheater.

That's right: The Church of Kanye and America's other church, football, are coming together like a deadly collision on Biscayne Boulevard. Tickets, surprisingly, are not that expensive — they start at $20 for lawn and go up to $100 via Live Nation — but they'll probably sell out by the time you're done reading this sentence. If you somehow snag tix, expect the same mix of Kanye music and proselytization — along with the overpriced merch — that has come to mark these concerts.

It's been less than two months since West last visited Miami: He debuted his second opera, Mary, at Miami Marine Stadium on Virginia Key during Miami Art Week this past December 9. New Times' reviewer called it "a one-of-a-kind occasion," although it was mostly notable for the bizarre photos of West covered head-to-toe in silver paint and foil. He also released a second gospel album, Jesus Is Born, with his Sunday Service Choir on Christmas Day. And before all of that, he presented his documentary, Jesus Is King, in IMAX theaters across the nation, including South Florida. The film was shot at the Roden Crater — artist James Turrell's massive, years-in-the-making installation in Arizona that West has been supporting financially.

Speaking of Arizona: West also recently headlined a Christian festival in Tempe with a lineup that included several anti-LGBTQ figures, just so we're all clear on where this Jesus stuff might be taking him.

Kanye West Presents Sunday Service. 11 a.m. Sunday, February 2, at FPL Solar Amphitheater, 301 Biscayne Blvd., Miami; 305-358-7550; bayfrontparkmiami.com. Tickets cost $20 to $100 via livenation.com.
KEEP MIAMI NEW TIMES FREE... Since we started Miami New Times, it has been defined as the free, independent voice of Miami, and we'd like to keep it that way. With local media under siege, it's more important than ever for us to rally support behind funding our local journalism. You can help by participating in our "I Support" program, allowing us to keep offering readers access to our incisive coverage of local news, food and culture with no paywalls.
Make a one-time donation today for as little as $1.