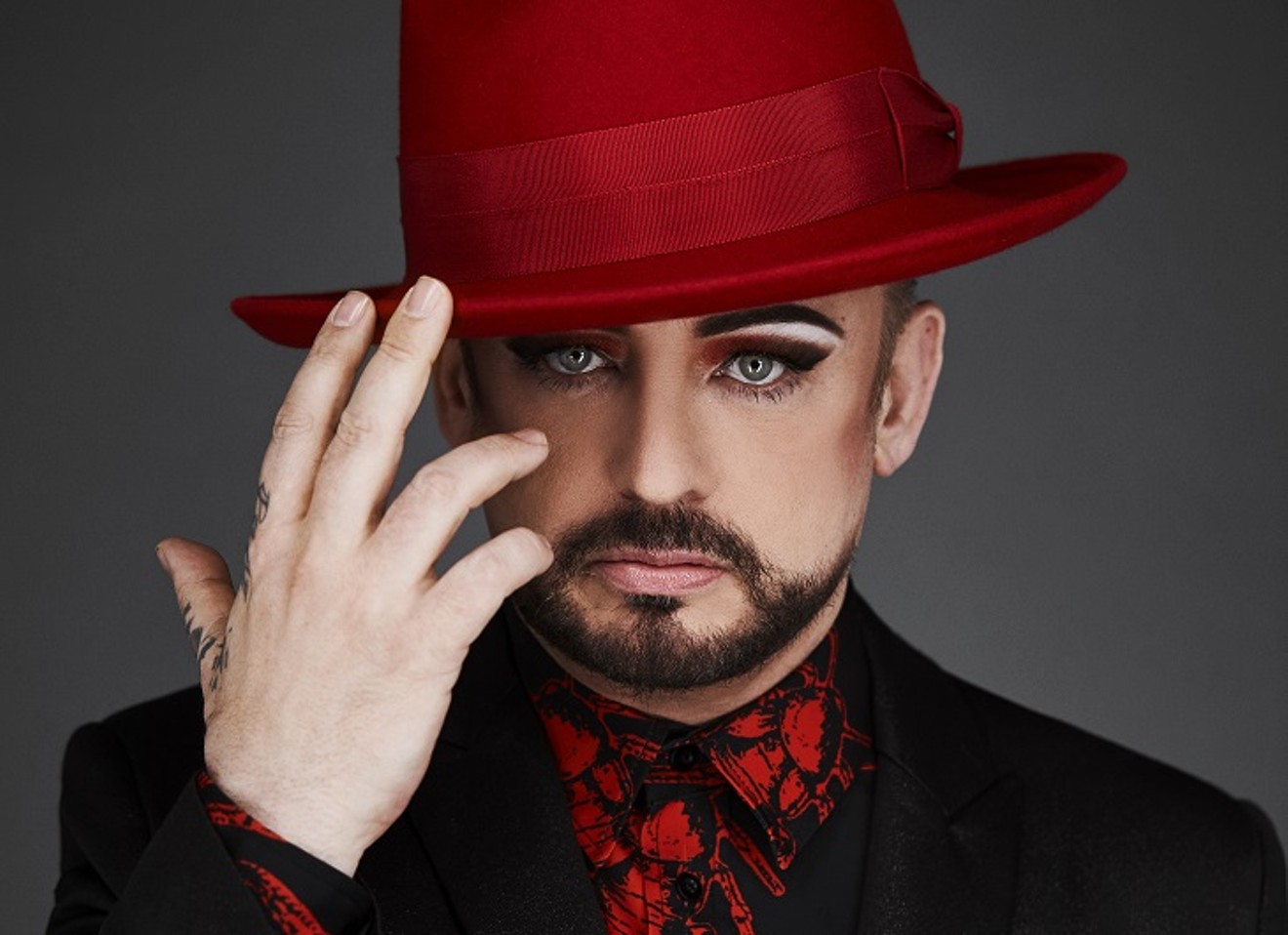 Boy George Courtesy photo
Boy George is calling from Australia, where he’s finalizing filming as a coach on that country’s seventh season of The Voice. He's purportedly on the phone to discuss his and Culture Club’s upcoming summer tour with the B-52's and Tom Bailey of Thompson Twins, but he has something else on his mind: wedding cakes.

Earlier in the day, the U.S. Supreme Court ruled in favor of a Colorado baker who, citing religious objections, refused to make a cake for the wedding of a same-sex couple. George has kept tabs on the decision from halfway across the globe and is disturbed by the decision, but he questions the ruling with the kind of winking irreverence the world has come to expect from him over the span of more than three decades in the public eye.

“I mean, what is than cake?” he says, laughing. “You shouldn’t even be able to describe as ‘straight'! It’s the funniest thing. Refuse to serve beer to gay people because it might make them butch! It’s so silly that there's even a court ruling about it.

“If you think about it, what’s next?” he says, getting serious for a moment before reverting to his cutting sense of humor. “We can’t sell you a car? drive it in a gay way? go through a gay club or pick up a gay cake? Or maybe you'll fill it with lesbians? It's ridiculous.”

If he’s able to laugh in the face of a regressive social flashpoint such as this one, it’s at least partly because of the thick skin he had to grow beneath his flawless foundation and shimmering eyeshadow. “When I met my first manager and I used to go visit him at his very posh offices in Mayfair, people would really stare at me, and I did to tell them to fuck off.” In much the same way queer kids have looked to him for decades as an example of what it means to navigate the world unapologetically, George says he looked to punk rockers and glam artists such as David Bowie for inspiration. “I was a teenager when punk exploded. It was the most amazing time to be a because it gave you all those things that you want as a teenager. And I think that what I did after that with the New Romantic scene and Culture Club was, I think initially, it was definitely a because people were very intolerant.”

After decades of witnessing progress on queer issues around the world with steps taken backward along the way, does he subscribe to an approach of incremental change or gradual social progress? It would be all too easy for someone in his privileged position to sit back and wait, he acknowledges. “The problem with the long game is that most people are just trying to survive. Someone like me, I have the luxury of being Boy George, and a lot of what I do is excused and accepted because of who I am and my position in the world as a famous person. But I think for an ordinary kid in the street, you can’t have a long-game view, because you're surviving the slings and arrows of your everyday existence. It’s really only when you get older that you look back and have any kind of perspective on who you were and what you've done, and what you could've done to make it better.”

And though letting time heal wounds is not his recommended approach to social progress, it’s worked wonders on one of the longest relationships of his life: the one he shares with his bandmates in Culture Club. All founding members reunited in 2014 and have been recording and touring on and off since then. Despite their well-documented past disputes, George says years of distance afforded them the reflection time needed to carry on amicably.

“When you hear about some bands that go on the road and don't talk, and they travel in separate cars or private planes, there is no amount of money on Earth that could seduce me to work with people that make you that unhappy. So my policy has always been — 'cause I love what I do and it's such a kind of sacred ritual, performing live — the energy and the frequency have to be right. So over the years, when we've fallen out, we just didn't speak to each other. And that has been the best medicine for those periods. And then when we're over it, we're over it — and we're over it right now. And I think we've all grown up a lot."

Boy George and Culture Club. With the B-52's and Thompson Twins' Tom Bailey. 6:30 p.m. Sunday, July 1, at Pompano Beach Amphitheater, 1806 NE Sixth St., Pompano Beach; 954-946-2402; theamppompano.org. Tickets cost $49.50 to $199.50 via axs.com.
KEEP MIAMI NEW TIMES FREE... Since we started Miami New Times, it has been defined as the free, independent voice of Miami, and we'd like to keep it that way. With local media under siege, it's more important than ever for us to rally support behind funding our local journalism. You can help by participating in our "I Support" program, allowing us to keep offering readers access to our incisive coverage of local news, food and culture with no paywalls.
Make a one-time donation today for as little as $1.