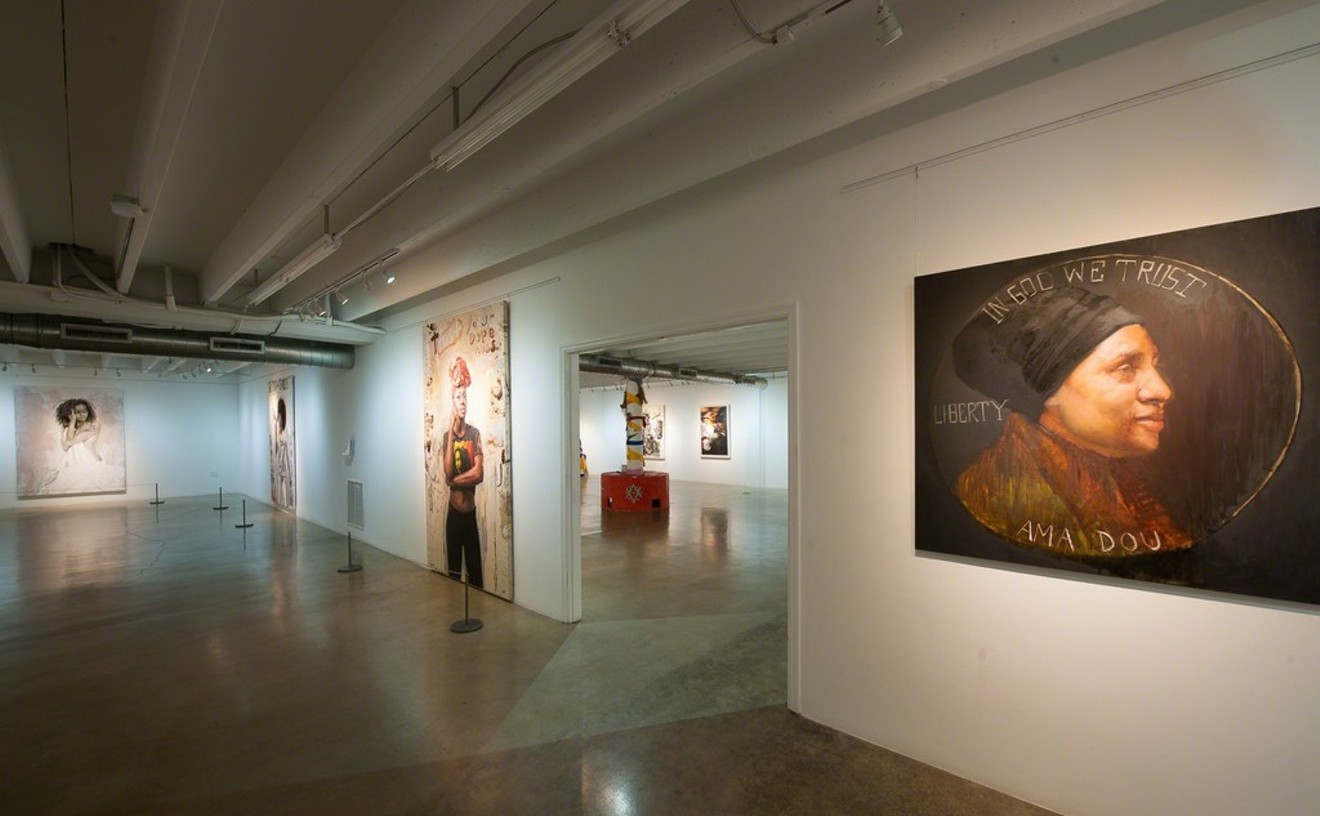 Little Haiti is beginning to burst at the seams with new life. As galleries move north from Wynwood, this cultural enclave is quickly becoming the center for high art in the Magic City. One place that stays true to quality work, artists, and the neighborhood is Yeelen Gallery. It has been recognized by Vogue as a hidden gem to visit during Art Basel, and mentioned in the New York Times, so director Karla Ferguson and her husband, painter Jerome Soimaud, have much to be proud of. His exhibition "Black Freedom" described the faces and stories of Little Haiti in charcoal and graphite on large-scale canvases. This gallery has a longer history in the area than others that have popped up and is dedicated to "contemporary urban culture." It pushes back against gentrification by showing pieces by international artists who make work that speaks to both an art crowd and the neighborhood's unique mix of cultures. Yeelen concentrates not only on art but also on social practice, making it more than just a place to watch the walls.

It's not typical that a self-taught artist dude, learning how to mix oils in his old Edgewater apartment, hat on head, glass of vodka in hand, ends up ten years later selling out booths at Volta and Scope art fairs. But Farley Aguilar is no typical man. He possesses true talent. Not only has his obsessive nature served him well in developing his skill, but also his critical eye has continued to improve him. The Nicaraguan-born, Miami-raised prodigy didn't excel at Southwest Miami Senior High but found inspiration poking around the works of philosophers at the University of Miami Law Library — a school he did not attend. As an outsider artist, his images are cinematic, with spooky scenes and stories ready to be told. The colorful canvases feature humanity at its most haunting and warped. But you can't stop looking. A loner, Aguilar is forever critiquing the mob mentality and finding new ways to explore this human tendency he'll never understand. This is an artist whose brakes will not be pressed anytime soon. Expect him to keep on trucking all the way to the top.

The most surprisingly touching show this past year came with birds — live parrots to be exact. Bik Van der Pol is actually a Dutch couple: Liesbeth Bik and Jos Van der Pol. They create postmodern work that speaks both to the location where it's being shown and to the environment. So in response to the asinine move by the Florida Department of Environmental Protection to prohibit use of the words "climate change" (which officials are now disputing), the artists created an installation at PAMM that highlighted the issue. They used live parrots in "Speechless," which was on display August 13, 2015, through February 21, 2016, and played T.S. Eliot's The Wasteland to these feathered dinosaurs. But the birds demonstrated their own personalities and let the love light shine. They sang songs from the American songbook and danced and formed attachments. In some ways, the most magnificent thing about the show was that it brought viewers closer to the natural world through the human-like qualities of these creatures. Though they returned home to Simbad's Birds & Pets, they will forever have left behind the message that climate change is real and that protecting the natural world is an essential part of life here on Earth.

"Newsman: The Photojournalism of Tim Chapman"

Tim Chapman is an old-school journalist. He began photographing at a young age during Miami's first wave of Cuban immigration in the 1960s. For decades after that, he consistently captured the Magic City's seedy underbelly while working at the Miami Herald. HistoryMiami's "Newsman: The Photojournalism of Tim Chapman," curated by another longtimeHeraldphotographer, Al Diaz, honors the lensman's storied career and commitment to documenting South Florida history. The exhibit features Chapman's life's work, which he donated to the museum in 2013, as well as cameras, press passes, notebooks, and other artifacts. Chapman's photos, which will be shown through August 14, 2016, capture the essence of some of Miami's most tumultuous moments. One shot shows crack merchants trying to climb down from the top of Coconut Grove's Mutiny Hotel after they hear a distant siren. Another displays a Cuban baby being hoisted in the air after arriving at Eglin Air Force Base during the Mariel Boatlift. For Chapman, these moments weren't just news; they were the story of mankind in the subtropics.

No one threatens a lawsuit better than Republican presidential candidate Donald Trump. The racist cheese doodle hands them out like bite-size candies on Halloween. Of course, for every asshole, there is an equal and opposite jokester. If Trump is the best lawsuit threatener, New York-based artist Bryan Zanisnik is the world's best lawsuit bluff-caller. He was slapped with a cease-and-desist order by author Philip Roth in 2012 the very first day of a five-week performance piece that involved the artist's silently reading one of Roth's works in a clear container while baseball cards and uncirculated U.S. currency swirled in the air around him. Rather than back down, Zanisnik stuck his tongue out at the author and finished his series. Roth threatened a lawsuit but never did a thing — just like Trump. It left an impression on Zanisnik, though. So this past January 30, when Zanisnik debuted his latest installation at Locust Projects, the whole thing revolved around Roth's obsession with control and the artist's intent to stick it to him. Zanisnik built a forest of stucco pillars in Locust Projects' main space, each featuring tear-away holes that revealed hundreds of books written by and about Roth. It is a daring and hysterical work, and so far, Roth has been silent. Hip hip hooray, art lives to see another day. 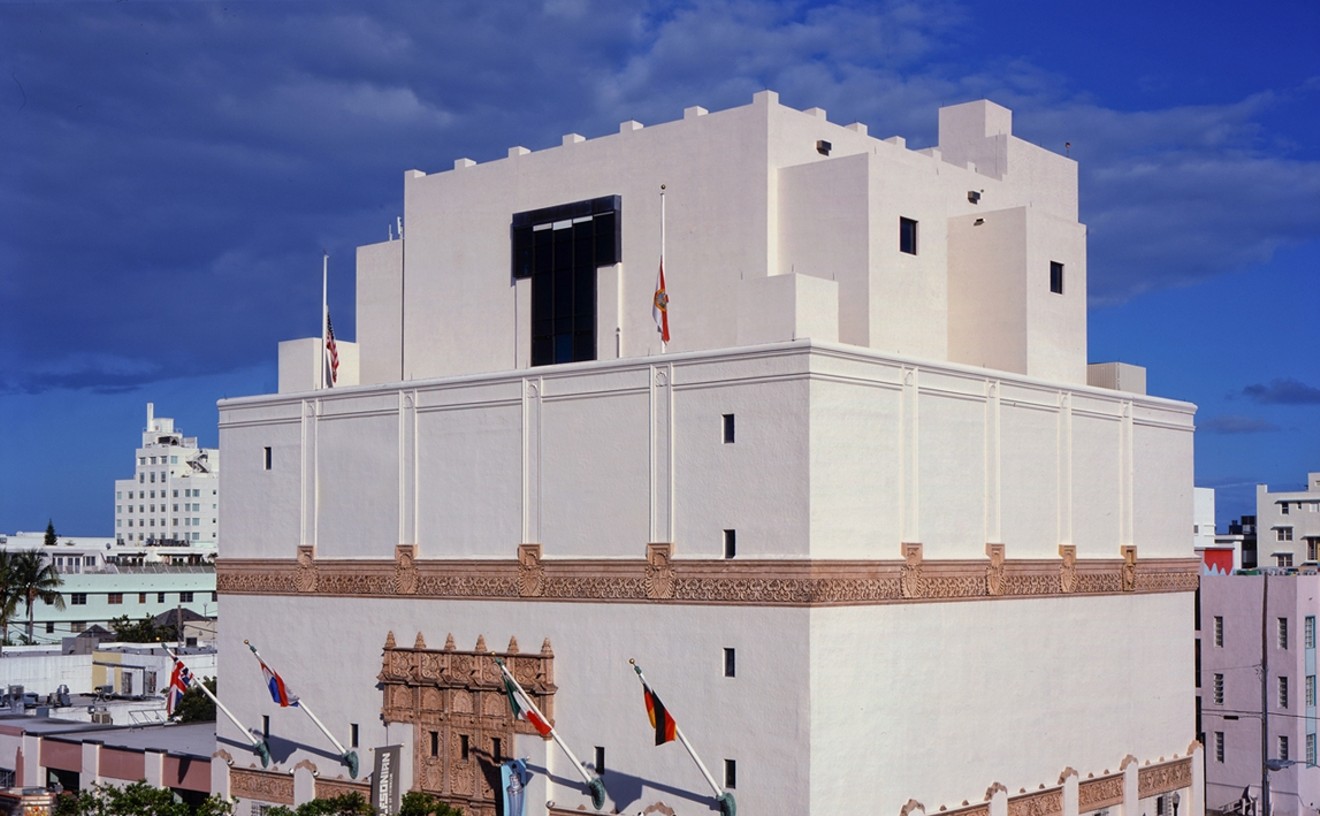 Before a certain developer got a museum on the bay named after him, and before Miami's 1 percent broke from a certain city to form its own art institution, there was the Wolfsonian-FIU. Founded in 1986 and opened to the public in 1995, the museum focuses on the role of design from the 1850s to the 1950s thanks to the Mitchell Wolfson Jr. Collection of Decorative and Propaganda Arts. Housed in the fortress-like building that is the former home of the Washington Storage Company, the museum is a beacon of culture in an area better known for late-night partying and barely-there swimwear. With 30 years under its belt, the space continues putting on some of the best programming, including 2015's "Philodendron: From Pan-Latin Exotic to American Modern," which examined beloved South Florida greenery as an icon in design. The Wolfsonian is open daily except Wednesday, and admission costs $10 (members get in free). A complimentary tour of the collection begins at 6 p.m. every Friday — it's highly recommended if you want the museum's knowledgeable staff to put the works into context.

One of the telling signs of a successful artist is his mass appeal. Do people like his work? Are they purchasing it? Is his stuff found in museums across the country? But for an artist who occasionally uses the sides of buildings as canvases, the biggest question is: Will people take pictures in front of his mural? The answer to that determines everything in our social-media-conscious society. The work of artist Magnus Sodamin — New York-born, Miami-bred — is found all over the streets of the Wynwood Arts District, and everyone loves snapping photos. In 2015, when the shopping mall the Wynwood Block was ready to open, Sodamin was tapped to give the building's exterior a bit of color. A combination of brilliant hues such as magenta, yellow, royal blue, and black all trickle down the walls. At first, they might appear like simple splatters of color, but plenty of thought went into the piece. And it makes for a memorable backdrop for your next Wynwood selfie.

After 13 years of sobriety, street artist Joaquin Lamar Hailey, better known as Chor Boogie, fell off the wagon about two years ago. So the San Diego-born artist, along with his wife, performance artist Elizabeth Bast, made a spiritual and medicinal journey to Gabon, Africa. There, they performed a ceremony involving the root iboga. After ingesting it, Hailey entered the spirit world. He destroyed his deeply rooted negativity, threw it in a trash can, and set it on fire. Love shot out of his third eye, cleansing him of the desire for toxins and inspiring him to create Hieros Gamos outside the Macaya Gallery. The painting depicts angry faces and stern eyes blossoming into something of a lovebird. Instead of depicting crinkled eyebrows, Boogie spray-painted love-soaked eyes and a heart beaming from a third eye. It is a testament to his rebirth.