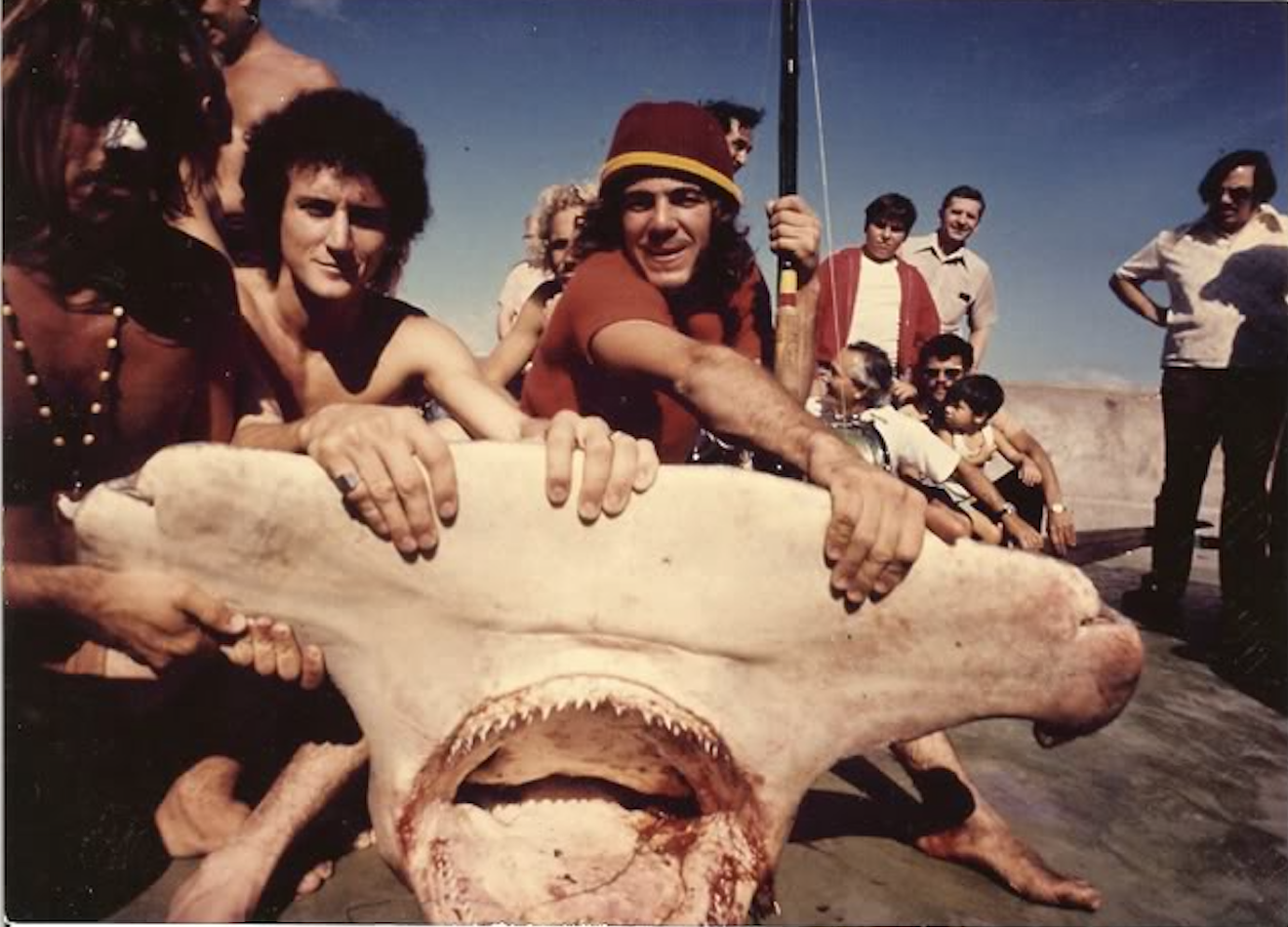 Rene De Dios (center) was more than a shark fisherman — he was a local legend. Courtesy of William Fundora
At dawn, the line towed a massive hook at its end, along with half a barracuda that someone had to paddle out on a surfboard and drop off past the breakers. A man sporting a mustache, shoulder-length brown hair, sneakers, jeans, and a T-shirt leans back against the pull of a gargantuan reel attached to a colossal rod. Now the line is taut, drawn to the extremes of tension it can withstand. On one side of the line is a hammerhead shark — a beast, perhaps a record-breaker. On the other end is Rene De Dios — the man who was once the king of shark fishing in Miami Beach.

This was a regular scene on the First Street Pier of yesteryear. And a new documentary directed by Miami native Robert Requejo Ramos, Rene De Dios and the South Beach Shark Club, explores the exploits of the man who lived to fish and became a legend in his own time, as well as the legacy he left behind. It also offers a rarified look at the Miami Beach that once was and the many ways the lives of locals have changed over the years.

"In South Beach at the time, these people were raw, man," Ramos explains. "They lived off the ocean." In the 1970s, nobody was more emblematic of life lived by the ocean than Rene De Dios. By the time he was 20, De Dios, a Miami-Dade Community College student, was an icon. People would line up on South Beach first thing in the morning in the hopes of hopping into his van to drive with him to the Florida Keys to fish for sharks. They'd even volunteer to take his bait offshore, swimming with it at their own peril, just to earn his respect. He was larger than life. 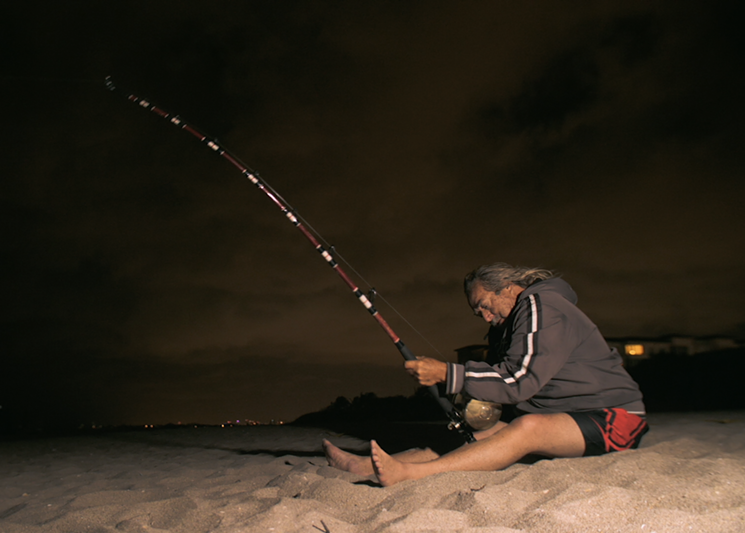 James "JD Hammer" Fuqua has been battling sharks in Miami Beach for more than 30 years.
Courtesy of William Fundora
"There was only one guy," says James Fuqua — AKA Jimbo, AKA JD Hammer — a mentor to De Dios and a renowned shark fisherman to this day. "He was the master. He became the guy that outdid the teacher. He became the guy that made the teacher look like crap — that's how good he was."

The film, which was recently selected for the Miami International Film Festival's CinemaSlam and which can be supported through Indiegogo, does more than profile a bygone icon. It also paints a picture of a Miami that no longer exists. Before there was the South Pointe Pier most Miamians know, there was the First Street Pier. Back then, locals could cut bait, cast, and fish at their leisure from the pier. But as Miami Beach began to draw more tourists, the city began encroaching on the fishermen who had long called the pier home.

The First Street Pier was knocked down the year before the Mariel Boatlift. Its destruction changed everything for De Dios and his disciples on a quest to become the best shark fishermen on land or sea. Around the same time, the City of Miami Beach began dredging off the coast of South Beach. In an effort to expand the beach itself, the city destroyed not one, but two coral reefs — one far offshore and one that can still be found underfoot along the low-tide line. By the time the city was done, the entire ecology of the beach had been irrevocably changed.

"Back in the day, you could dive off of Fifth Street and just swim a little bit out and catch lobster off of rocks," Ramos recalls. "If you go to any other island in the Caribbean, that’s how it is always. If you go to Cuba, if you go to the Bahamas, anywhere that is more untouched than Miami Beach, you can go and practically just jump off the beach and catch a lobster or spear a nice fish and eat it. Now you see little kids in Miami Beach with a fucking snorkel they bought at the store to look at murky water with toilet paper in it." 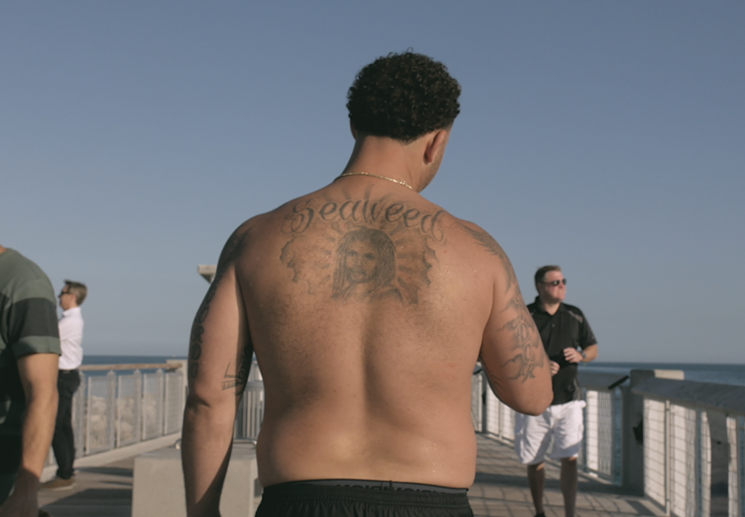 Shannon Bustamante represents the next generation of shark fishermen in Miami, the heir apparent to Rene De Dios' legacy.
Courtesy of Robert Requejo Ramos
And though the city has made it more difficult for people like De Dios to thrive along the shores of Miami Beach, the film shows there are still those who carry the torch he passed on. Shannon Bustamante, who at the age of 8 began fishing with De Dios and who is the heir apparent to his shark-fishing mantle, has continued battling monsters of the deep regardless of whether others misunderstand what he does.

"Ninety-five percent of the people that live in Miami Beach now are transient or showed up on Miami Beach," Bustamante says. "They have no idea what it was back then." It's that "back then" that Ramos sets out to capture and convey to his audience.