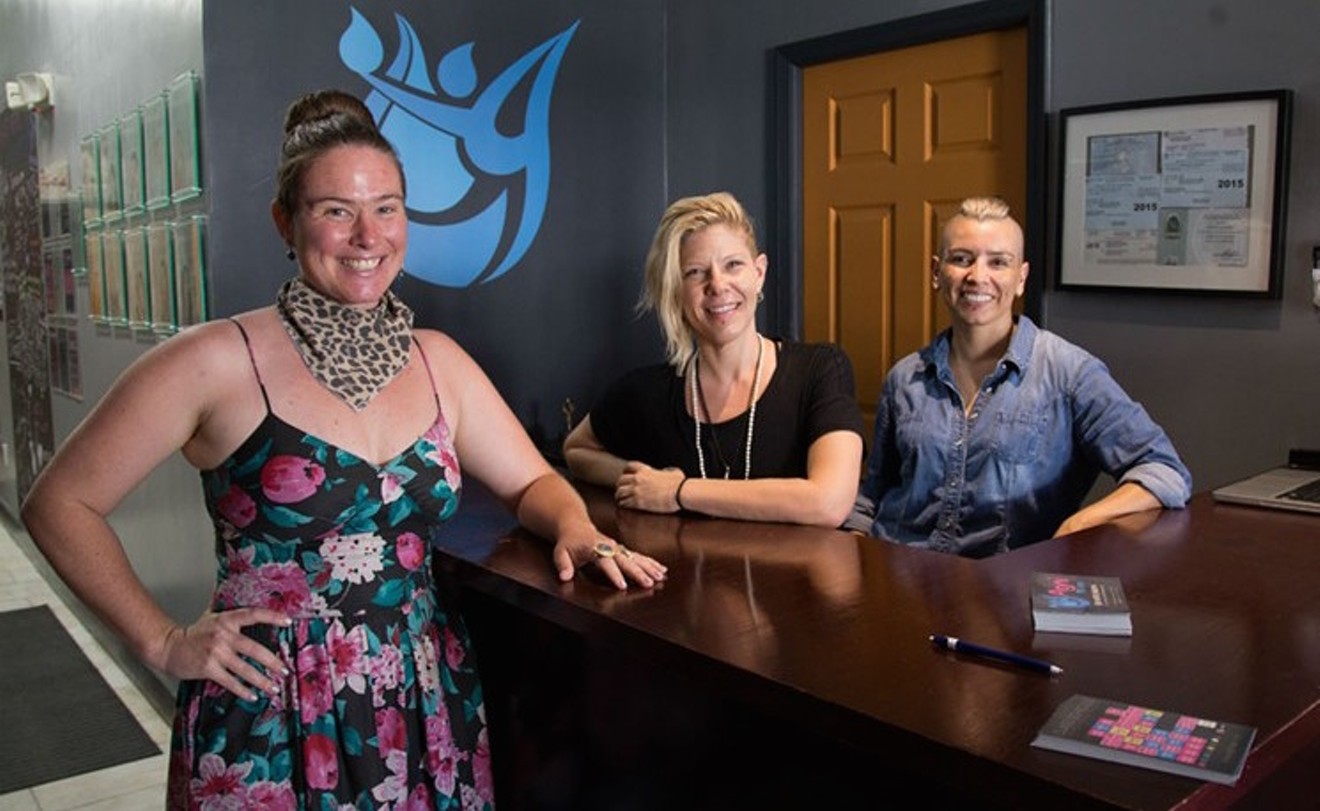 Organizers E. Parker Phillips, Carrie Guzanick, and Viviana Villagra. Photo by Tobias Packer
Despite recent political divisiveness, there are havens where unity and acceptance reign supreme. One such place is the Queer & Trans Community Yoga Class at Agni Miami.

The Saturday class is designed to offer a welcoming environment for members of Miami's LGBTQIA community and incorporates reiki and poetry as part of the practice. "We want any person who feels they don’t fit into a typical yoga class at a usual yoga studio to be able to come and feel safe, important, and included," class co-organizer E. Parker Phillips says.

"The class did grow out of, and continues to be rooted in, a need to create a safe yoga space for LGBTQIA people as well people who are differently abled," Phillips says. "In terms of our values, we are fat-positive, body-positive, kink-positive, multiracial, multigenerational, and feminist."

The class takes place every Saturday from 2:30 to 3:45 p.m. (barring special events). It's donation-based, and the suggested amount is $5 — much cheaper than the average Miami drop-in practice.

Phillips cites the still-widespread queer- and trans-phobia as a driving force behind the creation of the class. "Trans people face discrimination and mistreatment at work, in housing situations, and even from their families, resulting in higher instances of homelessness, incarceration, and negative health outcomes."

The team actually restructures the studio before each Saturday class, including placing an "All Genders" sign at the men's locker-room entrance. The women's locker room is also inclusive of transfeminine people. "Agni is wheelchair-accessible," Phillips adds. "The studio already had a bathroom open to all genders. We seek to create a space where transgender and nonbinary people don’t have to worry about where they are going to pee, especially when they are there to take care of their selves and their bodies."

It's not just about downward dogs and happy babies. At this class, self-care equals resistance. "So as much as we are practicing yoga, we also want to raise awareness around transgender stigma, sex worker stigma, the destructiveness of white supremacy, the limitations of capitalism, and other marginalizing issues people may face in trying to take care of themselves, their loved ones, and the world we live in," Phillips says.

As far as the practice itself, the team tries to encourage emotional openness through the poses. Though there are some standing and vinyasa poses, instructors primarily stick to a "yin" style of yoga where poses are held for longer periods of time. Reiki healing is performed by Guzanick, Villagra, or Vivian Marthell, and Phillips reads poems at the beginning and end of class. 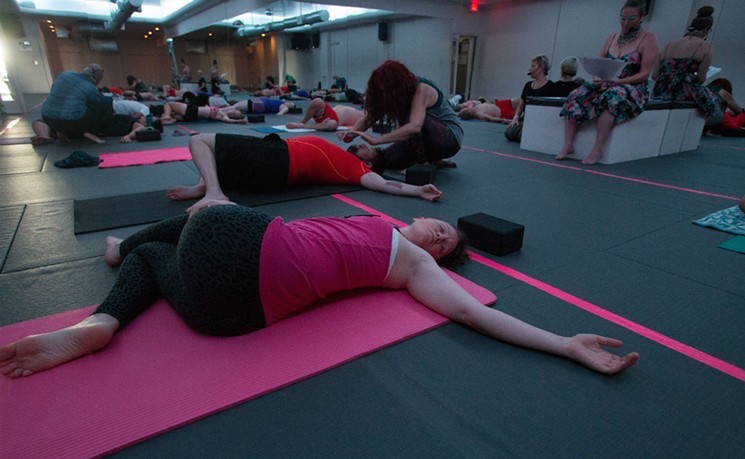 Inside Agni's Queer & Trans Community Yoga class.
Photo by Tobias Packer
"People have described the class as 'magical' and 'a unique space of vulnerability,'" Phillips says. "We already have a cadre of regulars who attend weekly, even driving from as far as Fort Lauderdale to take the class." Its organizers took Queer & Trans Community Yoga to Trans Con, a conference for the transgender community held by the Aqua Foundation in March, and also participated in the O, Miami poetry festival last month. They'll also be part of the Unity Coalition’s Trans Art Festival in June.

The session hosts people of all walks of life, Phillips adds. "The class is held at a hot yoga studio, so there will be Saturdays when people young and old will walk in thinking they are going to attend a 'normal' hot yoga class, only to be surprised by the queer magic that is our yoga class. Interestingly enough, these people, many of whom are cisgender and/or heterosexual, have expressed a massive appreciation for the physical as well as emotional and mental aspects of the class."

The class is about expanding yoga beyond the physicality of it, without a focus on body size or appearance. "Every body is a yoga body, we believe. People should do yoga because they love themselves or to fall in love with themselves. These are simple yet powerful messages."

KEEP MIAMI NEW TIMES FREE... Since we started Miami New Times, it has been defined as the free, independent voice of Miami, and we'd like to keep it that way. With local media under siege, it's more important than ever for us to rally support behind funding our local journalism. You can help by participating in our "I Support" program, allowing us to keep offering readers access to our incisive coverage of local news, food and culture with no paywalls.
Make a one-time donation today for as little as $1.
Hannah Sentenac covers veg food, drink, pop culture, travel, and animal advocacy issues. She is also editor-in-chief of LatestVeganNews.com.
Contact: Hannah Sentenac
Follow:
Twitter: @hannahgetshappy