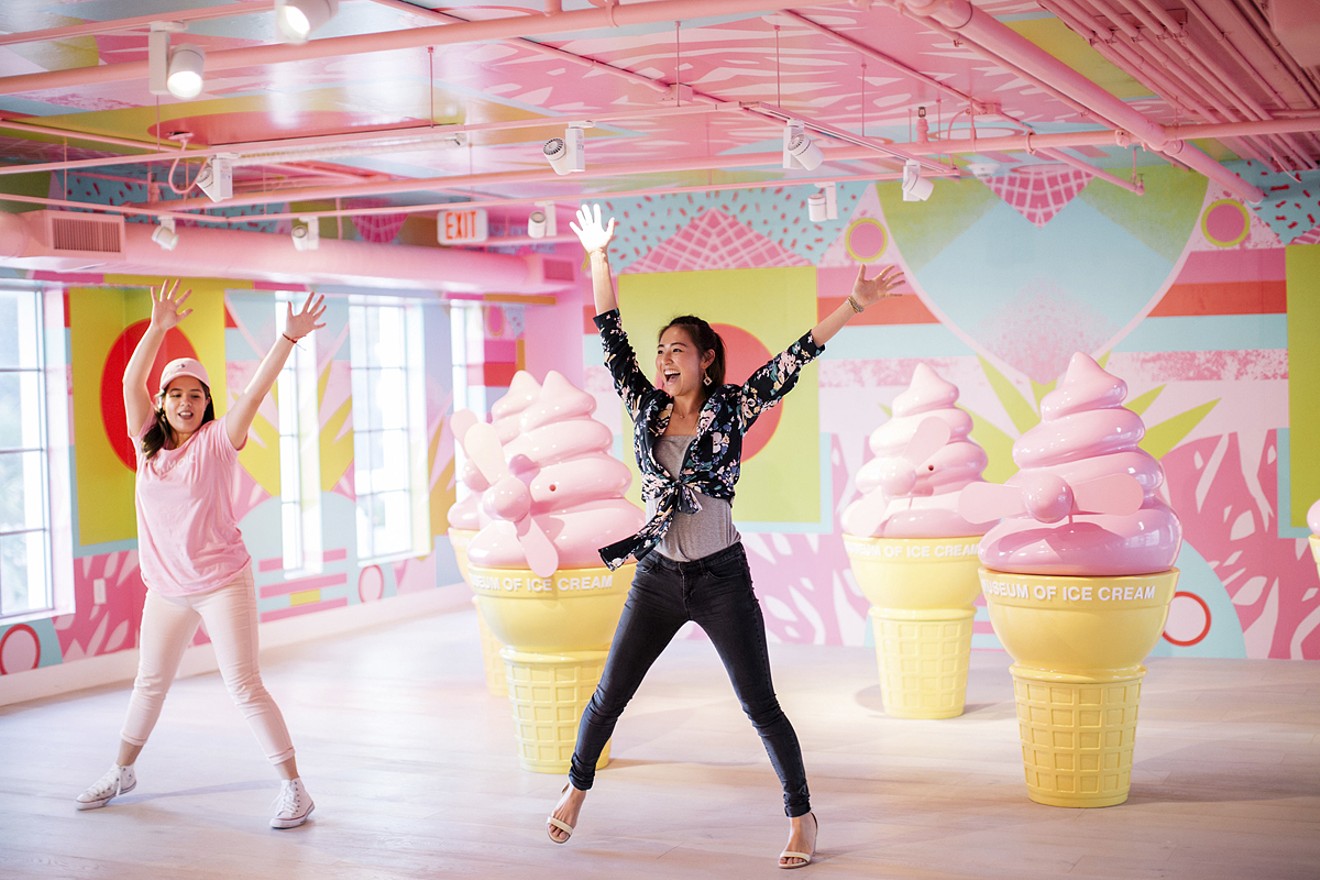 Go for a spin in the Faena District. Get a sneak peek of the Museum of Ice Cream in Miami Beach. Photo by Katie Gibbs

Maryellis Bunn, the wunderkind creative director behind the Museum of Ice Cream, opined in a New York Magazine article earlier this year that "advertising is dead." What she meant, according to the story, is that advertising of the skirt-chasing Mad Men era is over, leaving in its wake Bunn and partner Manish Vora among a group of visionaries elevating retail experiences for selfie seekers everywhere.

Since its opening in New York in 2016, the roving Museum of Ice Cream has continued to gain popularity, with subsequent stagings in Los Angeles and San Francisco. Now the museum will pop up this week in Miami's Faena District. Visitors paying $38 a ticket can enter the four-story, OMA-designed building on Collins Avenue, set against sweeping ocean views. The museum has been wildly popular in other cities — where tickets sold out in minutes and garnered an eager waitlist of more than 200,000 — so the Miami pop-up's visitors, who will be gently wrangled by a colorful pink army of guides, can expect a magical mystery tour on a cream-and-sugar high.

The Miami version contains odes to art deco architecture, key lime pie, and palm trees. Vora says the concept will be attuned to the multicultural mix of the city. "The sprinkle pool is the base that will carry through the colors of Miami. There's a sensuality so unique to [this city]. The Latin, the different cultures... and we'll play with the indoor-outdoor feeling."

Museum experiences in other cities have centered on multiple ice-cream-themed exhibitions curated by Bunn. For example, the L.A. installation was built in six months by more than 200 craftspeople, woodworkers, steel welders, and painters.

Among the highlights were a swimmable pool filled with more than a hundred million sprinkles, a gummy bear mural, a banana split made of 10,000 "bananas," a live mint chocolate chip grow room, and a jungle of melting ice pops.

Along with a plethora of satisfying selfie opportunities around every corner, Miami's pop-up will unveil an adjacent museum store, accessible for the first time to both ticketholders and destination shoppers. Vora says the shop will allow everyone to "take a piece of the experience home with them."

Vora isn't a new visitor to South Florida, but he says he's been happy to get to know Miami outside of major events such as Art Basel. "[Bunn and I] both have spent time here professionally in the past, and it's nice to really see the best of the city outside of those moments and just check out all the great neighborhoods."

"When you spend time away from your phone and your apps, it has to be elevated."

Bunn, an ice-cream lover from Laguna Beach, California, holds a dual degree in business and design and is a graduate of Parsons School of Design and New York University. She honed her creative vision for retail's future while working as head of innovation for Time Inc. and as a consultant for lifestyle makers Facebook and Instagram.

Vora met Bunn while she was consulting for Lightbox, an experience-tech venue in Manhattan, where Vora was CEO. They later formed 1 and 8, a company specializing in creating what Bunn refers to as "social squared" projects — experiences designed to provoke imagination, bring people together in the physical world, and be amplified through social media.

Vora, who says his niche is finding and building audiences, left Wall Street to pursue overlapping interests in the merging of art, culture, and tech experiences. A regular culture correspondent for NBC New York, he cofounded the contemporary art platform Grey Area, where he developed art partnerships with Helmut Lang, Stella McCartney, the Guggenheim Museum, Smart Car, and Bergdorf Goodman.

"When we think about advertising and we think about retail, what has changed in our society — particularly for millennials — is that we are spending less time in human-to-human experiences," he says. "So when you spend time away from your phone and your apps, it has to be elevated."

He says that although the cities hosting the museums change, the project's foundation remains the same — a focus on making people get out of their normal experience. He notes that through Bunn's design discoveries, they've been able to experiment with ice cream with a quarter of a million people. That statistic is not lost on sponsors, who now include American Express, the chocolate brand Dove, and the dating app Tinder.

"We learn so much — how different types of people interact with our museum, from a teenage girl or young family with their kids to a 5-year-old tasting ice cream flavors to 80-year-old grandmas. Everyone loves it."

Vora talks about the value of creating memories for museum patrons, noting he hopes visitors will question the very nature of the experience. What is ice cream? What is a museum? What is theater?

"How do we create things that are going to be stories that you can share with your friends and your families?" he asks rhetorically. "This is for everyone to enjoy, whether you're wearing a sprinkle crown in third grade or at the office... We need to find things that are escapism but are still social."