The Best May the Fourth Star Wars Day Events in Miami

May the Fourth be with you. Photo by Karli Evans
Nerd out this May the Fourth you should. Socially acceptable for grown-ass adults to wear costumes it will be.

Star Wars Day is upon us and once again will bring fans out of the woodwork to celebrate Luke Skywalker and crew. Everyone’s favorite holiday based on a pun has grown in popularity since its inception in 2011, with more businesses around the country getting in on the outer-space action every year.

Despite its too-cool-for-school reputation, Miami participates in the annual Star Wars revelry with film screenings, drink specials, trivia, and costume contests. Here’s your guide to May the Fourth options in South Florida, just in case you’re one of the many people looking to dress up and let your Star Wars flag fly.

1. May the Wh4rf Be With You. Rep your side in the battle of good versus evil with the Wharf’s two $10 specialty cocktails: the Force and the Dark Side. Or you could remain neutral and order $3 glasses of wine or $1 Wharf lager pints from 4 to 7 p.m. The Wharf is also getting into the spirit with inflatable Star Wars characters and giveaways, including masks and lightsabers. Be sure to bring your appetite, becaise Mojo Donuts, Spris Pizza, King of Racks BBQ, and Garcia’s Seafood Grille & Fish Market will provide the eats. And DJs Vinni Soul and Livitup will provide the music. Noon to 2 a.m. Friday, May 4, at the Wharf, 114 SW North River Dr., Miami; 305-906-4000. wharfmiami.com. Admission is free.

2. May the Fourth Be With You at Stache. This seventh-annual Star Wars Day party might cause a great disturbance in the Force. Stache Drinking Den + Coffee Bar will turn the traditional Star Wars mythos on its head with a risqué celebration involving burlesque and drag queens. Also on tap: a live art show with artists painting on canvases, Star Wars-themed photo booths, costume contests (prizes include Florida Supercon and Popcorn Frights Film Festival tickets), and DJ Lindersmash. 11 p.m. to 4 a.m. Friday, May 4, at Stache, 109 SW Second Ave., Fort Lauderdale; 954-449-1044; stacheftl.com. Admission is free.

Photo by Karli Evans
3. Star Wars Day at J. Wakefield Brewing. The Wynwood brewery displays its Star Wars pride year-round with murals and collectibles, so May the Fourth is like Christmas around here. Star Wars films will play on the big screen all day Friday as you imbibe specialty draughts such as Chewbacca's Morning Coffee Brown Ale and R2D2's Beep Boop Boop Berry Blend Sour Ale and stuff your face with food from Ms. Cheezious. To commemorate the occasion, J. Wakefield Brewing will sell a specialty T-shirt and tank top for $25 each. Feel free to dress up like anyone from the Star Wars galaxy for the festivities — except droids. As the signage clearly states, they’re not allowed. 6 to 11 p.m. Friday, May 4, at J. Wakefield Brewing, 120 NW 24th St., Miami; 786-254-7779; jwakefieldbrewing.com. Admission is free. 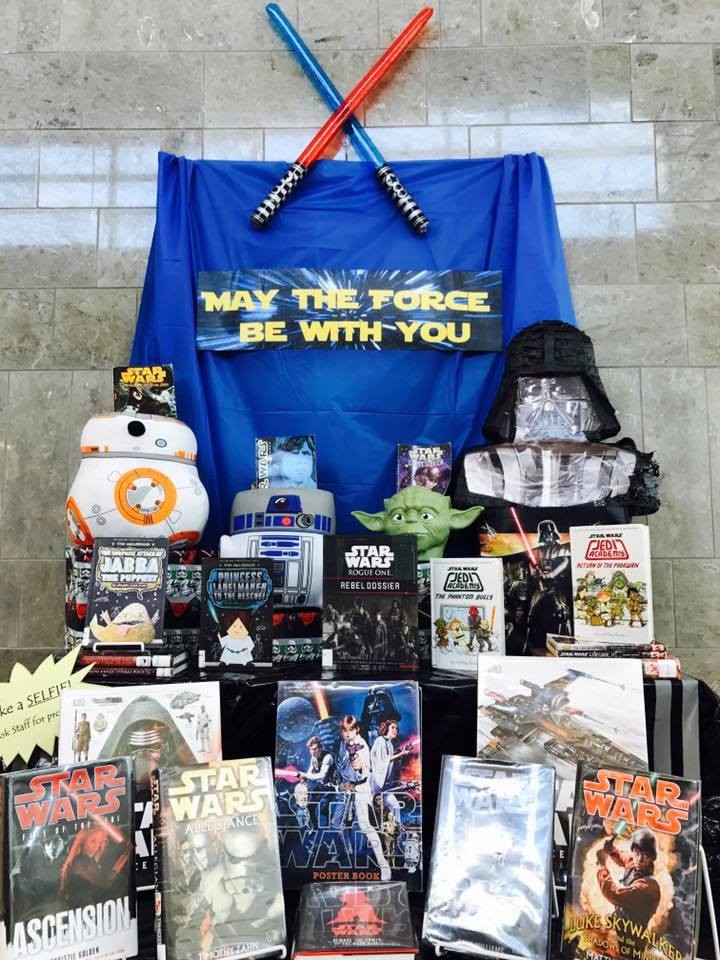 Photo by Karli Evans
6. Ska Wars. The ska is strong with this one. Jacuzzi Fuzz and Spred the Dub will return for the annual Ska Wars celebration at Churchill's, this time joined by Tony Nasty & the Wicked3. Sci-fi flicks such as Spaceballs will play in the background while costumed patrons work up a sweat dancing into the wee hours at the Little Haiti rock club. The guest with the best costume will score a prize package including a bar tab, which is pretty much like earning Jedi Master status at Churchill’s. 9 p.m. to 3 a.m. Friday, May 4, at Churchill’s Pub, 5501 NE Second Ave., Miami; 305-757-1807; churchillspub.com. Tickets cost $5 via holdmyticket.com.

7. Las Rosas' May the Fourth Be With You. Luke Skywalker had to channel the Force to earn his green lightsaber, but you simply need to be one of the first 12 people to show up at Las Rosas to score one of your own. The Allapattah music dive bar will give away glow-in-the-dark lightsabers (that make noise!) in honor of its May the Fourth party, which is scheduled to kick off with a performance by Off Orbit and close with Stardust One. 9 p.m. to 3 a.m. Friday, May 4, at Las Rosas, 2898 NW Seventh Ave., Miami; 786-780-2700; lasrosasbar.com. Admission is free.

8. May the Fork Be With You. Coco Bambu’s happy hour will get a little happier this Friday for those in Star Wars costumes. Dress up and enjoy the Brazilian seafood eatery’s happy hour — which is typically two hours and includes half-off beers and caipirinhas and 25 percent off appetizers — the entire night. Those drink specials will come in handy when you’re trying to Jedi-mind-trick yourself into signing up for Coco Bambu’s karaoke. 6 p.m. to 1 a.m. Friday, May 4, at Coco Bambu, 955 Alton Rd., Miami Beach; 786-348-0770; cocobambu.com. Admission is free.