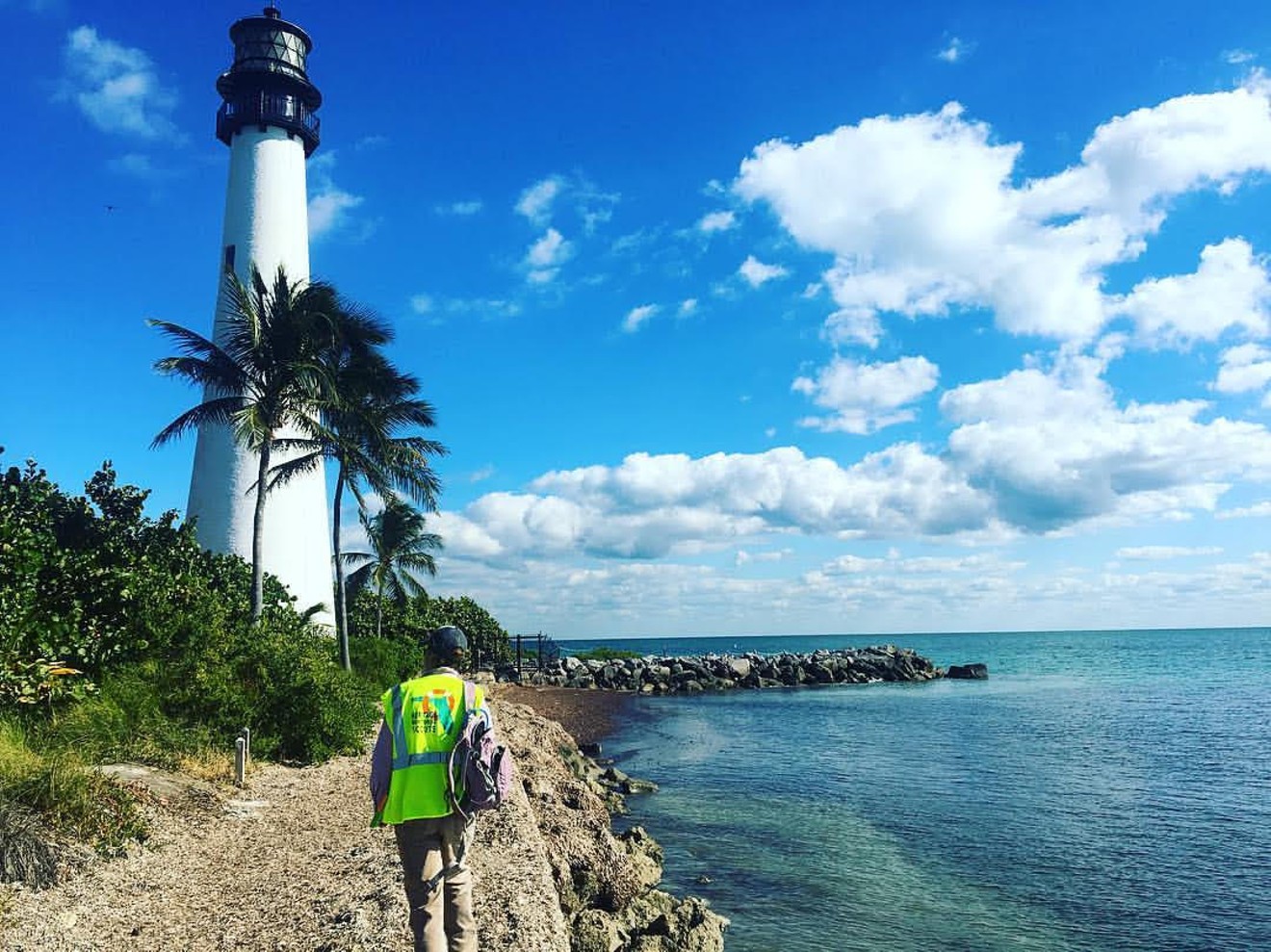 A FPAN staff member monitors Bill Baggs Cape Florida State Park. Photo by Rachael Kangas
Despite some GOP members’ skepticism about the state of the environment, climate change continues to affect the geographically vulnerable ecology of South Florida. State politicians such as Gov. Rick Scott have circumvented the issue, denied its urgency, and even refused to acknowledge the existence of sea-level rise, worsening weather patterns, and erosion. But at the Tidally United Summit, taking place August 4 and 5, a group of archaeologists, geologists, academics, activists, and local legislators will gather at the Native Learning Center in Hollywood to discuss the impact of climate change from an angle that’s often overlooked: its effect on indigenous communities and cultural heritage.

Sara Ayers-Rigsby, director of the southeast and southwest regions of the Florida Public Archaeology Network (FPAN), says, “Oftentimes, native communities get overlooked in these discussions... which at the level of city planners and local government groups. But these issues will impact all of us: native communities as much as other communities. Everyone deserves a say in these issues... Native communities have a tremendous knowledge of the past and uses of the land. They can contribute substantially in that way.”

The Tidally United Summit, which is hosted by the chairman, , and communities of the Seminole Tribe of Florida, is organized in partnership with the Seminole Ah-Tah-Thi-Ki Museum and the Florida International University Global Indigenous Forum. The first day of the conference is dedicated to presentations and discussions about various critical issues of climate change, including “Community Engagement to Monitor Coastal Heritage at Risk,” "Evaluating and Mitigating Shoreline Erosion in South Florida,” and a series of presentations about the socioeconomic and cultural effects of sea-level rise and how to address it. The second day of the conference includes tours of Everglades National Park, Shark Valley with National Park Service rangers, and the Ah-Tah-Thi-Ki Museum, where participants will hear a talk from Samuel Tommie of the Bird Clan, who was born on one of the islands in the open prairie river of the Everglades, where his family has lived since the mid-1800s. 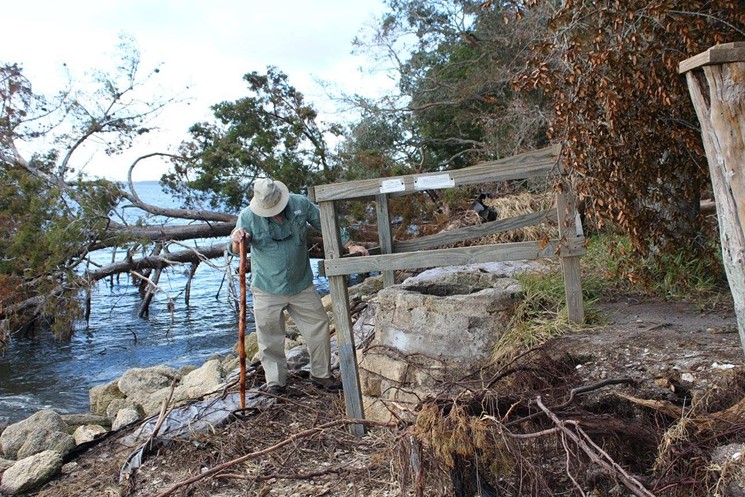 A Heritage Monitoring Scout (HMS) documents well after Hurricane Matthew.
Courtesy of FPAN Northeast
Ayers-Rigsby says she’s excited about many of the speakers who have been invited to the summit, including keynote speaker Joe Frank of the Seminole Tribe of Florida and Joanna Hambly and Tom Dawson from the University of St. Andrews in Scotland, who will speak about Scotland’s Coastal Heritage at Risk project. Ayers-Risgby will present on the Florida Public Archaeology Network’s Heritage Monitoring Scouts (HMS) Florida program, a public engagement program that trains citizens how to track changes for archaeologic sites at risk from sea-level rise and erosion.

“Climate issue is a huge issue for us here [in South Florida]," Ayers-Rigsby says. "After Hurricane Matthew, I went to document archaeological sites impacted by the hurricane. It was eye-opening. There was a shipwreck that had moved a thousand feet and an early Spanish colonial well that had sunk into a shell midden, which was completely eroded after the storm. [We have to stress] the immediacy of these issues. These are not problems that will happen in 50 years; these are problems that exist now.”

She emphasizes that important pieces of history are at stake with the effects of climate change. Paul Backhouse, a Seminole tribal historic preservation officer and the director of the Ah-Tah-Thi-Ki, is one of the archaeologists working on Egmont Key, a site that is at risk from shoreline erosion. The site is documented in historical records as a location where the Seminole were forcibly relocated by government authorities. Backhouse elaborates that after the Third Seminole War from 1855 to 1858, the Seminole people were taken to Egmont Key to be deported to Oklahoma. “What happened is horrific. They took people to Egmont Key and marooned them there until a boat came to collect them. It was effectively used a concentration camp.” 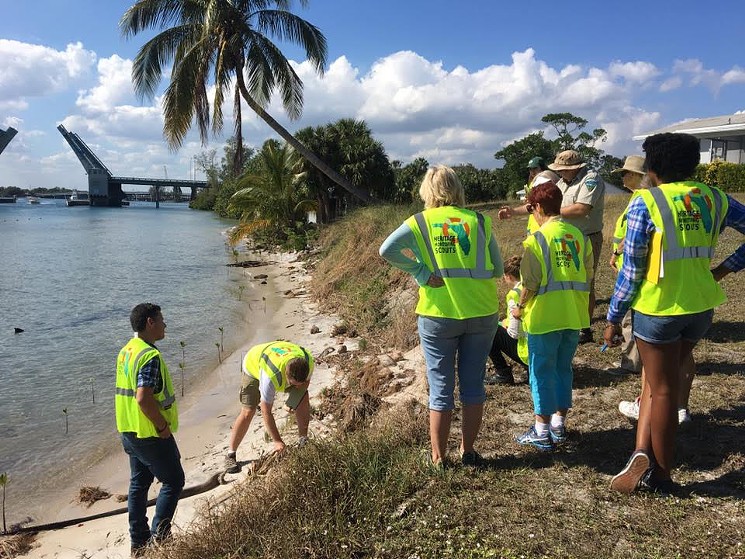 HMS Scouts at Jupiter Inlet Lighthouse Outstanding Natural Area. The mangrove line marks the shoreline prior to Hurricane Matthew.
Photo by Sara Ayers-Rigsby
Backhouse says he and his team had discussions with Seminole elders to think about the implications and meaning of protecting the site. “Should it be preserved? Do we want to fight to keep this place of horror? The elders decided that we want to remember this place for the youth. We have been fighting to preserve it.” But sea-level rise and erosion have been affecting Egmont Key for more than a century: half of the land mass of the site has disappeared since the 1870s, and Backhouse says that according to simulations, with a rise in the global temperature of a half-degree Celsius, the island will soon be underwater.

“This information that can shed a lot of light on this brutal situation, a very dark period in our nation’s history, is at risk of being lost," Ayers-Risby says. "[With climate change], we are losing critical historical information... With three feet of sea-level rise, we will lose over 16,000 archaeological and cultural sites... When we lose a site, we lose an opportunity to learn about the past.”

So what can citizens do to fight the effects of climate change? Both Backhouse and Ayers-Rigsby cite education, which includes events such as Tidally United that bring together leaders in the field who are taking action with a sense of urgency and immediacy. Backhouse calls citizens to action: “Become knowledgeable and become involved.”

Tidally United Summit. Friday, August 4, and Saturday, August 5, at the Native Learning Center, 6363 Taft St., #101, Hollywood; 954-254-9657; nativelearningcenter.com. Tickets cost $40 for the general public at fpan.us/projects/tidally.php and are free for tribe members with registration at eventbrite.com.