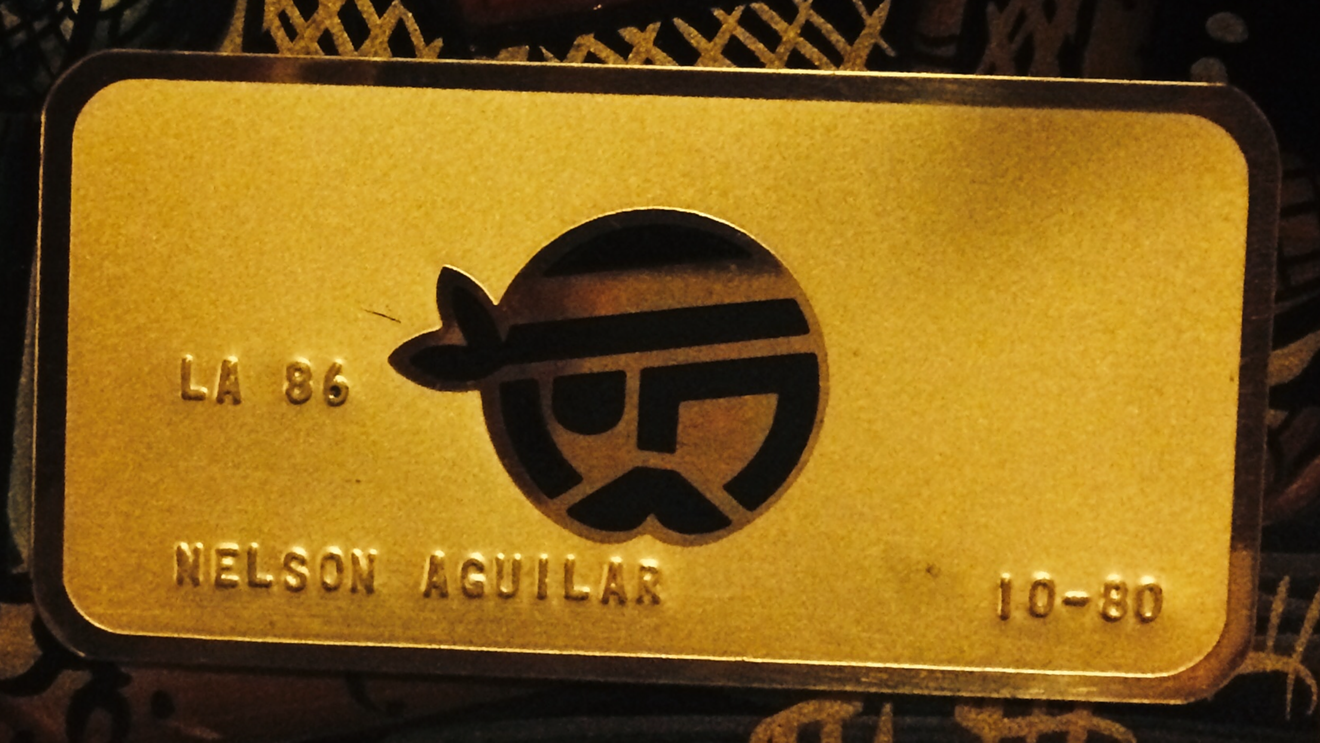 A Mutiny Club membership card owned by drug kingpin Nelson Aguilar. Nelson Aguilar
The Mutiny at Sailboat Bay was a notorious hotel and club in Coconut Grove that became the nerve center for Miami’s drug culture when the venue opened in 1969. It was there that the city’s lawless cocaine cowboys reigned over an era of unbridled excess heralded by a revival of the drug’s popularity in the late '70s. "Your life could change in a Miami minute,” Super Papi, a former bodyguard for one of Miami’s top '80s drug lords, says in Roben Farzad's new book, Hotel Scarface: Where Cocaine Cowboys Partied and Plotted to Control Miami. “That’s how small the world was at the Mutiny at the time."

Farzad also experienced a life-changing Miami minute years later when he found an abandoned Mutiny just before leaving for college in 1994. The building, which had been neglected since 1985, piqued his curiosity: “I took a Post-it note with an address from the building to college up North,” he says. “I jumped on LexisNexis and InfoTrac. And every time I was homesick, I would scratch that itch.”

The Iranian-born, Miami-raised author is now host of NPR One’s Full Disclosure and special correspondent for PBS NewsHour. The story of the Mutiny consumed his spare time for more than two decades with copious research.

It's still making headlines, just as Hotel Scarface, which is excerpted in this week's feature story, hits bookstores October 17. Willie Falcon, the Cuban-born Miami High School dropout-turned-drug lord, was locked up for 26 years; he was picked up by immigration upon his release from prison this past June 13 and is awaiting possible deportation to Cuba. His brother, fugitive Gustavo Falcon, was on the lam for 26 years until U.S. Marshals captured him in Orlando this past April. Willie’s main partner was another Miami High dropout: Sal Magluta. They called themselves "Los Muchachos" and were also hotshot champions in '80s speedboat racing, a world popular with coke lords. The gang was charged with smuggling 75 tons of cocaine worth $2 billion into the United States. Magluta is serving a 195-year sentence. 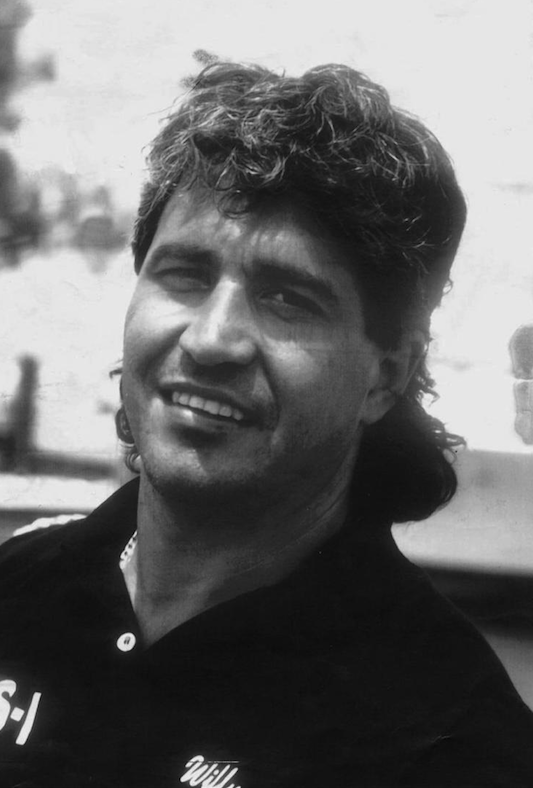 Willie Falcon, circa 1980s.
T. Rafael Cimino
The story of Los Muchachos is just one of many that began as a deal brokered at the Mutiny, where kingpins bluffed one another, pointed guns, and held court at tables equipped with landlines. Gorgeous women were as abundant as the steak and lobster dinners downed with free-flowing Dom Pérignon. Quaaludes and pot were also on the menu. The ballers were too rich to count their cash and tossed wads of it to staffers, who hustled for the best tips. Gleaming gold chains and spoons for snorting yeyo completed the extravagant look. Money was laundered in the underworld, but the ostentatious Mutiny set didn't shy away from flaunting its dirty wealth.

The rooms at the hotel boasted themed fantasy suites designed to fulfill the hedonistic pleasures of drug-addled guests. There were Roman-style bathtubs, the finest bubbly, and fancy rides. The price for an exclusive golden membership card with a pirate logo cost $75 and came with a whole lot of clout. “Everybody wanted to be at the Mutiny,” Farzad says. “It was the place to be seen. There was no South Beach yet. We weren’t an internationally known city like we are today.”

Women were also trafficked, sometimes even marched in front of dopers. “They had a dock in Dinner Key, and a billboard on U.S. 1 advertised a 24-hour dispatch service for girls,” Farzad explains. Not all of the women who spent time at the Mutiny were hookers, but sex for blow was part of the social contract, he says. Promiscuous behavior was the norm. “Everybody was screwing everybody. It was interchangeable parts. Wives would screw to get back at doper husbands.”

The Mutiny thrived under the watchful eye of crooked cops and legitimate investigators who couldn’t keep up with the drug trade’s sprawling influence over South Florida. The decade was also the age of disco and free love before the AIDS crisis. Other events rattled Miami. In 1980, the city experienced racial violence during the McDuffie riots, and the influx of 125,000 Cuban refugees from Mariel sent additional shockwaves.

In 1981, Time published a cover story titled "Paradise Lost" about the area. That was the same year Miami-Dade’s homicide total rose to 621. The infamous Dadeland Mall massacre had occurred only two years earlier, inspiring President Ronald Reagan to label the shootout the beginning of the War on Drugs.

“Miami was a failed state,” Farzad says. “The morgue was overflowing. It was gruesome for a long time. It was a crucible. The decade was the foundation of modern Miami — the inception point, its coming of age, its baptism of fire. All of it from Dadeland on.” 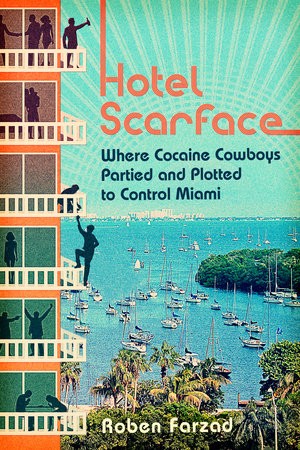 Cover of Roben Farzad's book.
Penguin Books
The War on Drugs has since captivated storytellers — most recently in Netflix’s series Narcos, which focuses on Colombian kingpin Pablo Escobar. But other filmmakers jumped on the story while it was still raw and unfolding. The book’s namesake, the 1983 film Scarface, which Farzad describes as a “pop cultural totem,” remains ingrained in collective memory like its art-imitates-life counterpart, the '80s TV series Miami Vice. Both offer audiences a gritty portrayal of the Magic City's decadent and violent age fueled by cocaine and the drug trade’s convoluted ties to international politics. An adaptation of Miami Vice hit the silver screen in 2006, and a Scarface remake is under development by Universal Studios.

Miami filmmakers Billy Corben and Alfred Spellman, who told the story of the city's drug-trade heyday in the 2006 documentary series Cocaine Cowboys, wrote an introduction to Hotel Scarface that explains how "tricky" it is to research the underworld of shrewd gangsters who left little evidence in a world rife with suspicion. Farzad’s detailed account, they note, is a major accomplishment.

The book is exhaustively researched and includes dozens of personal interviews focusing on the Mutiny and three generations of Cuban-exile smugglers. The dizzying cast of characters is tightly packed: A two-page list of names helps readers navigate the complex plot.

Bodies piled up, and so did the stories that haunt the pages of Hotel Scarface. They're exhausting to read, only because Miami’s toxic past is replete with drug addiction and its destructive effect on individuals and communities both rich and poor.

Hotel Scarface weaves stories in 55 short chapters, almost in play-by-play fashion. The language is clean and precise. It’s an easy read; its implications, however, are profound. Tales of opportunistic, cutthroat men who made fast money at the expense of other people’s lives leave many untold stories about the devastating consequences. New money trickled down to freebase crack on the streets. “They were free-market entrepreneurs, but the kilos kept coming in," Farzad says. "Downstream of that [were] destroyed families."

The Mutiny itself is also a victim, a “huge casualty of the savings and loan crisis,” he notes. The property, located at 2951 S. Bayshore Dr., reopened in 1999 as an upscale condo hotel washed clean of its filthy past.

But is Miami truly redeemed? The city’s skyline, which has changed dramatically since the '70s, owes something to the cocaine cowboys era. “Miami is the hot-money capital of America,” Farzad explains. "There's the shady ownership structure of condos. The flight money from violence and smuggling has gone into the skyline and political life of Miami. There’s something that’s constantly unsettled.

“The Mutiny was such a Rorschach of Miami,” Farzad says. The book, he adds, helped him come to terms with the Miami of his childhood. Hotel Scarface will probably do the same for Miamians who grew up hearing stories about drug violence on the evening news, reported by legendary TV anchor Ralph Renick, himself a regular at the Mutiny's bar.

Farzad’s Miami minute turned into a search for truth behind the walls of a historic building in a city that’s prone to cultural amnesia. For the author, the book epitomizes what it means to be from Miami.

“To be truly from Miami,” he says, “you must have a love/hate relationship. I left, but you can’t really leave. This book was a love letter to my city.”