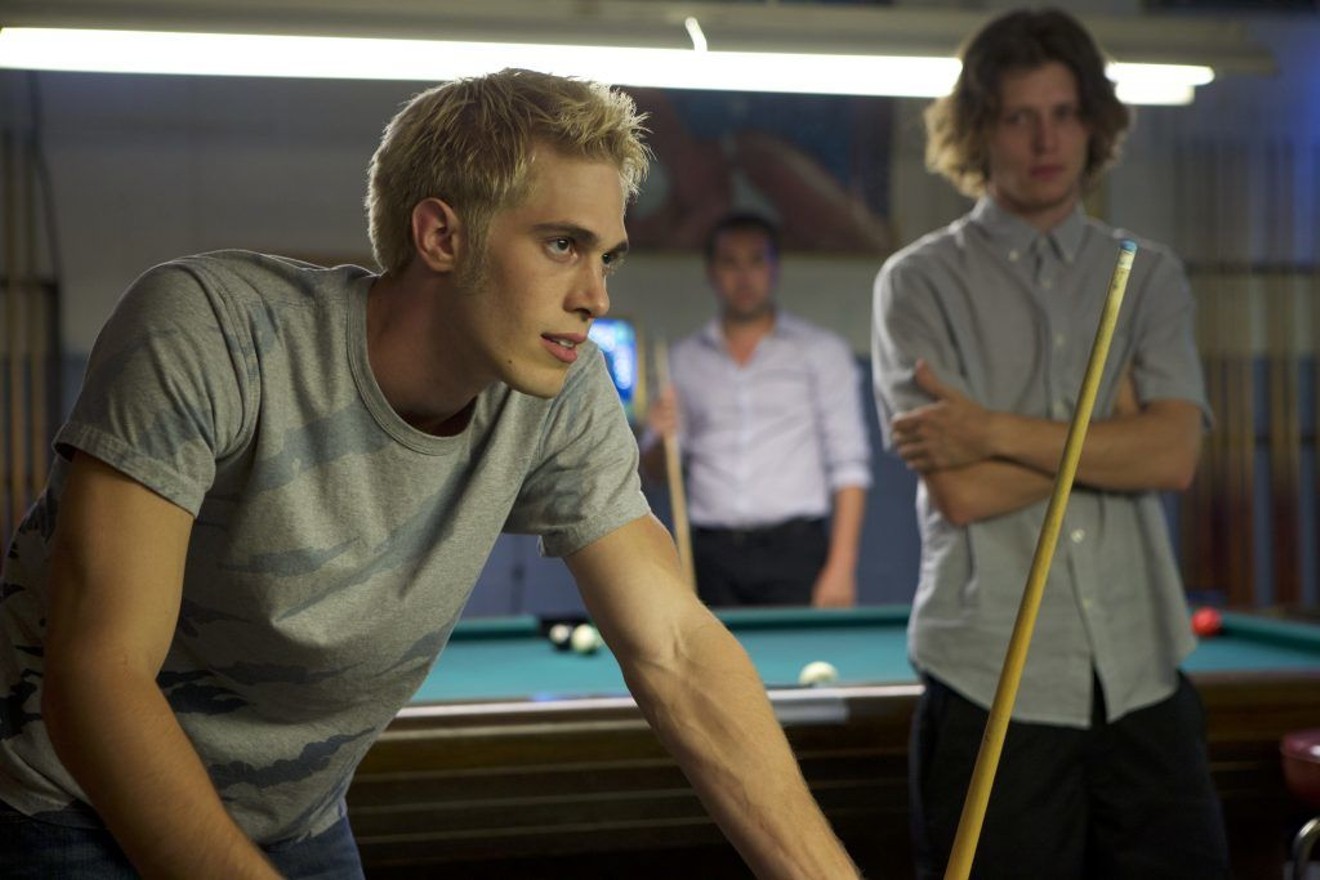 Blake Jenner (left) and Nick Eversman in Juvenile. Courtesy Fiction Pictures
Last year, around this time, Blake Jenner, the actor most people know for playing the dyslexic golden boy Ryder Lynn on Glee, was to make a homecoming at last year's Miami Film Festival. Jenner, who grew up in Kendall, was traveling from his home in Los Angeles for the world premiere of his first script turned into a movie, Billy Boy, starring himself in the lead role. It was directed by Bradley Buecker, who got to know Jenner from directing the actor in several episodes of Glee.

But after Miami Film Festival had announced its lineup, Buecker decided to pull the film, now renamed Juvenile, because he wasn’t happy with how it had been edited. The actor/writer would have been in contention for the Jordan Alexander Ressler Screenwriting Award at the festival, but he says he understands Buecker’s decision.

“Our director kind of stumbled upon a different kind of formula for the movie to express the message in a more creative and interesting way,” Jenner says, “so we both kind of needed time to dissect that together and figure out what we were trying to say within the film. But I think it was the right decision.”

In the film, Jenner plays Billy Forsetti, part of a ragtag group of high-school kids living in an unglamorous part of Los Angeles. They get their kicks by donning masks and perpetrating violent carjackings. When Billy finds himself falling for a waitress at a diner (Melissa Benoist) in charge of raising her younger siblings, he finds inspiration to change his ways. However, his about-face drives a wedge between him and the most reckless member of his crew, Mikey Valentino (Grant Harvey), whose only desire is to amp up the chaos that bonds him and the childhood friend he calls Billy Boy.

With the movie now set to be screened at Miami Film Festival’s 35th edition as a Florida premiere, Jenner is once again in the running for the award, which includes a cash prize of $10,000 from the family of the late aspiring screenwriter Jordan Alexander Ressler. “I’m so happy Miami Film Festival is letting me come back home with this and bring it back home to all my hometown friends and family,” Jenner says.

He says most of his family still lives in the Miami area and credits his drama teacher at Felix Varela High School for showing continued support during Jenner's time working in Los Angeles. Rey Bode remembers reading an early draft of the script for Juvenile and says Jenner was thinking about screenwriting even back in his high-school days. “He would talk to me about ideas he had for films,” Bode says. “He would write film.”

Bode says he remembers Jenner, who also played football and was on the wrestling team at Varela, as a driven student. Jenner graduated a year early because he had already begun getting calls to audition in Hollywood. “His ideas were always ahead of the game when most kids are just going through the motions,” says his former teacher, who still leads drama classes at the school. “You know high school — most high-school kids have a good time in high school. He knew that’s what he wanted to do. There was no other choice for him.”

“It was a fun class,” Jenner recalls, throwing a shout-out to his improvisation teacher, Ozzie Quintana. “Everybody was throwing curve balls at each other and not afraid to take a chances.”

Improvisation had such an effect on Jenner that he felt no preciousness about his script for Juvenile when his fellow actors diverted from it. In fact, Buecker says he had to sometimes remind the cast to return to the script. “There were moments when I had to go in and be like, ‘Guys, I actually want to shoot the script here, like I want to shoot the words that are on the page.'"

Buecker says they worked off a script that had a lot of rawness to it, which invited the experimentation. This rawness, he says, was also useful in finding the right mix of actors.

Actor Grant Harvey remembers returning to one audition after another, as the director tested for chemistry among the actors. Buecker recalls Harvey brought an intense commitment to the auditions, including one moment when the director actually feared for Jenner’s safety.

“Grant, in his audition, put Blake in a chokehold,” Buecker recalls with a laugh. “I literally thought I was going to have to stop the audition because I thought Blake was gonna pass out.”

Harvey says the film has a naturalism that comes from both the cast’s tendency to improvise and also Jenner’s writing. “I think anytime there's great ad-libbing in a scene and the moment changes, I think that all comes from a good template,” says the actor, “so we did ad-lib a lot, but having said that, it didn’t take away from his script.”

The idea of working with an actor who wrote the script for a director has its own challenges. Though Buecker admits there were moments that he and Jenner were at odds with how a scene should play out, their history of working on Glee made the collaboration easier than if they had never worked together before.

“Brad was really, really gracious with it,” notes Jenner, who also agrees that their past work together made the collaboration easier. “He was very gracious in analyzing the script with me. It was us meeting in the middle.”