The Glad Wall in Wynwood follows Pepsi's lead in using social unrest to fuel its advertising. Alvar Sunol
Earlier this week, Pepsi released an ad in which Kendall Jenner ditches a modeling gig, heaves her blond wig at a black woman, joins a political protest, and gives a cop a Pepsi to thunderous applause. The response from audiences was, to put it mildly, unkind.

But that didn't deter Glad, the garbage-bag brand, from installing a piece of art in Wynwood yesterday that trades in similar themes.

The Glad Wall, located on NW Second Avenue between NW 26th and 24th Streets, features four arm sculptures, painted black, protruding from the mural. Each holds a white trash bag, through which viewers can see the outline of an alphabetic letter. Together, they spell H-A-T-E.

The wall itself is covered in text references to social issues of the moment. Phrases read, "Pulse Nightclub," "Muslim ban," and "We will build a wall." On the lower right side of the mural, just above a garbage can, a caption reads, "We have a lot of trash to get rid of."

The message, according to a news release from Glad: "We've got a lot of garbage to get rid of, and Glad is literally getting rid of the heaviest of all — HATE — with an installation to convey that Glad’s unique ForceFlex technology lets us carry the heaviest loads without tearing the bag." 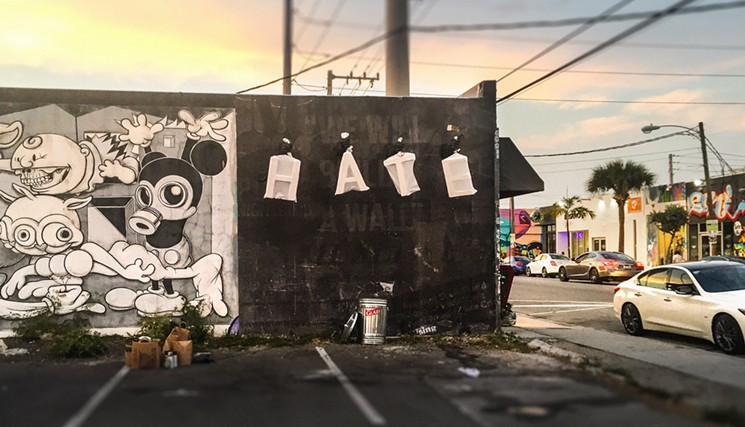 Alvar Sunol
"The idea was creating an outdoor installation-slash-artwork, and what it is, basically, is a product demo where we demonstrate the ForceFlex technology," says the project's chief creative officer, Alvar Sunol. "But at the same time, it is also a social statement."

The Glad Wall has been in the works at Alma ad agency, based in Coconut Grove, for the past three months, Sunol says. A team of creative directors selected artist Juan Rozas to create the work and scouted locations in Wynwood. The goal, Sunol says, was to create a work that addresses issues of prejudice in the Unites States — without getting too political about it.

"I would say that it is not a political statement, more a social statement," he explains, saying The Glad Wall tries "to indicate human values... With all the terrorism and racism and discrimination and all that, it seems like we are forgetting what real human values are. That's why we think this is the heaviest trash that we have to get rid of."

Pepsi's cringeworthy commercial didn't dampen Glad's spirits, Sunol says, because unlike The Glad Wall, the Jenner ad was too branded.

"Glad is not that present on the final piece. That makes it more authentic," he explains. "Glad as a brand is opening the conversation. But Glad is not there — you don't see the logo. You see the black wall and you see the product, but it's a part of the artwork."

Reactions to the wall were positive after it was installed yesterday, he adds, saying he witnessed gay couples kissing and taking selfies in front of the work. 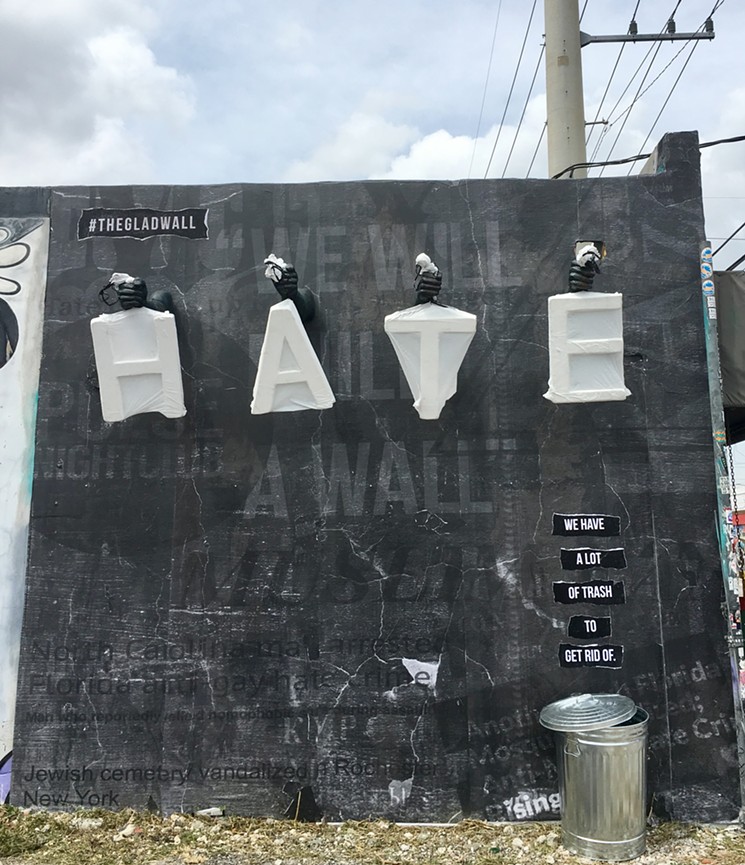 Alvar Sunol
But though Glad clearly intends to avoid making a political statement, it's impossible to separate the political from the social when it comes to The Glad Wall. The Pulse nightclub shooting is inextricably linked to gun laws and gay and Latinx struggles for equality. The "Muslim ban" referenced on the wall was an executive order issued by Donald Trump. "We will build a wall" is a promise from the president himself.

So, aside from this symbolic gesture, has Glad made any other efforts to help people and communities threatened by hate?

"This is the first thing that they're doing," Sunol says.

Any plans for the future? "Not so far."

Looks like Glad's efforts to end hate begin and end with this vague message of support. And it turns out the installation isn't much of a product demonstration either. Asked how heavy the letters in the bags are — you know, the ones intended to demonstrate the "ForceFlex technology" — creative director Juan Camilo Valdivieso admits, "They are not that heavy. It's more about the message."